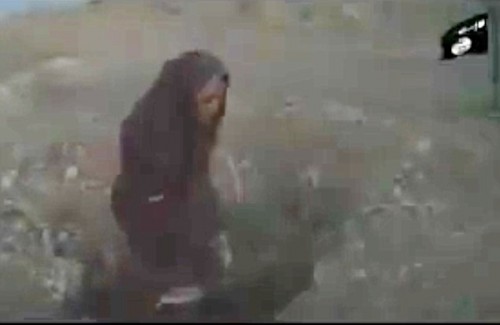 The Syrian Observatory for Human Rights reported Tuesday that it received a video showing fighters believed to be ISIS militants stoning a woman to death in the presence of her father after accusing her of adultery.

The video, which the London-based monitoring group said was recorded in Hama, where ISIS has seized large swathes of land, showed the woman pleading her father for forgiveness.

Two ISIS militants approached the father and pressed him to “forgive” his daughter because “she will depart life and meet God.”

One of the militants then began explaining to the woman the reason why she had to be “stoned,” saying that she would set an example for other women not to practice adultery.

“This punishment right now, is a result of your action you chose. No one forced you, therefore you need to accept God’s law, and to accept and submit to God. Islam is submitting to the will God,” he militant said.

“Do you accept God’s judgment?” the militant asked the women. She replied nodding.

He father then tied her to a rope he held and dragged her to a pit where she was stoned to death.

The militant group has been accused of brutal actions against civilians in the areas it occupies in both Iraq and Syria.

In July, the group stoned two women to death in Raqqah province, which is ISIS’s stronghold in Syria.

ISIS also stoned a man to death in the northern Iraqi city of Mosul in August, which it seized in lighting offensive months ago.