Hundreds of Lebanese trucks are stranded at the Syrian-Jordanian border 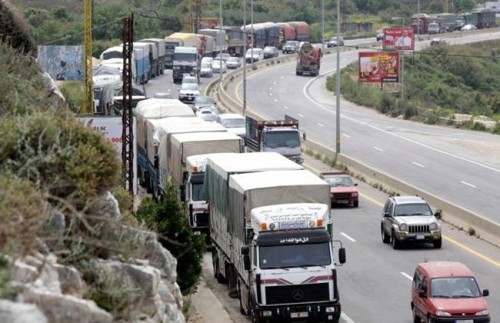 Several drivers of refrigerated trucks transporting agricultural products from Lebanon’s eastern Bekaa Valley were were caught up in crossfire at the Syria-Jordan border late Monday between the Syrian army and rebels.

The head of the Bekaa Farmers Gathering, Ibrahim Tarshishi, told Voice of Lebanon radio (93.3) on Tuesday that there were deaths and injuries among the drivers of trucks at the Nasib crossing.

“We were informed late Monday night that the trucks had reached the area of Nasib, just 1 kilometer from the Jordanian border when they came under heavy rocket fire and shelling, during fighting between the Syrian army and the rebels,” Tarshishi said.

Several of the trucks were engulfed in flames, he said.

There were around 250 Lebanese and Syrian lorries in the area when the battles started, he added.

Tarshishi called on the Lebanese Customs to stop trucks from entering Syria through Lebanon’s Masnaa crossing pending a solution to the situation on the Syrian-Jordanian border.