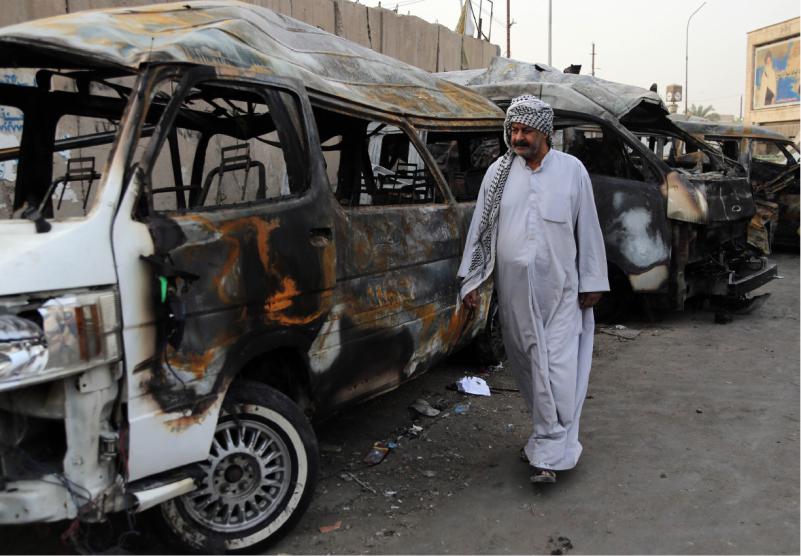 A man looks at the site of a car bomb attack in the Shula neighborhood of Baghdad, Iraq, Sunday, Oct. 12, 2014. A series of car bomb attacks in Iraq’s capital killed and wounded dozens of people in Shiite areas Saturday, authorities said. (AP Photo/Karim Kadim)
Share:

The triple attack took place in Qara Tappah in ethnically mixed Diyala province, an official from the Kurdish Asayish security forces said. He said the first bomber detonated an explosives vest at the gateway to a security compound that also houses the office of a main Kurdish political party. Minutes later, two suicide bombers plowed cars filled with explosives into the compound, causing heavy damage, he said.

The Islamic State claimed the attack, saying it was carried out by three foreign jihadists. The authenticity of the online statement could not be independently verified, but it was posted on a Twitter account frequently used by the militant group.

The group has seized towns in volatile Diyala province and has clashed with Kurdish forces there.

Hospital officials confirmed the casualties. All officials spoke on condition of anonymity because they were not authorized to speak to the media.

Bashir al-Dalawi, a member of the Qara Tappah municipal council, where the attacks took place, said that the bombs detonated near a government building, leading to the higher death toll. He says at least 107 people were wounded in the attack.

He added that some of the wounded were sent to hospital in the Kurdish self-ruled region for treatment.

In the Anbar attack, Brig. Gen. Ahmed al-Dulaimi was killed while traveling in a convoy north of the provincial capital Ramadi through an area cleared by Iraqi security forces a day earlier, Anbar councilman Faleh al-Issawi said. It was not immediately clear whether others were killed or wounded.

The Islamic State and allied Sunni militants seized the Anbar city of Fallujah, parts of Ramadi and large rural areas of Anbar early this year. The loss of Fallujah – where American troops engaged in some of the heaviest fighting of the eight-year U.S.-led war in the country – foreshadowed the later loss of second city Mosul and much of the north.

Iraq’s Interior Ministry confirmed al-Dulaimi’s death, calling him a “hero who set a good example for self-sacrifice.” It praised his role in reorganizing the provincial police force and leading major fighting that caused heavy casualties among the militants.

The attack in Anbar followed a bloody day in the capital, Baghdad, where a series of car bomb attacks killed at least 45 people in Shiite-majority areas. The Islamic State also claimed responsibility for those attacks.