Iraq pleas for U.S. ground troops as ISIS closes in on Baghdad 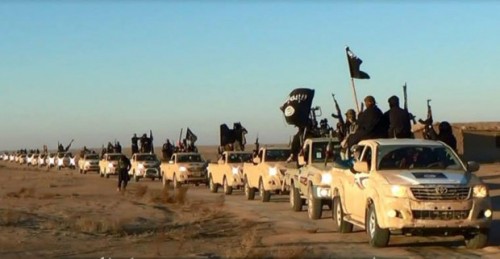 A convoy of vehicles and fighters from ISIS in Iraq’s Anbar Province.
Share:

Amid reports that Islamic State of Iraq and Al-Sham forces have advanced as far as Abu Ghraib, a town that is effectively a suburb of Baghdad, a senior local governor claimed that up to 10,000 fighters from the movement were now poised to assault the capital.

The warning came from Sabah Al-Karhout, the president of the provisional council of Anbar Province, the vast desert region to the west of Baghdad that has now largely fallen under ISIS control.

The province’s two main cities, Fallujah and Ramadi, were once known as “the graveyard of the Americans,” and the idea of returning there will not be welcomed by the Pentagon.

But were the province to fall completely into militant hands, it would give ISIS a perfect springboard from which to mount an all-out assault on Baghdad, where a team of about 1,500 U.S. troops is already acting as mentors to the beleaguered Iraqi army.

Iraqi government officials claim that while international attention has been focused in recent weeks on the Syrian town of Kobane on the Turkish border – where Kurdish fighters are still battling to keep advancing ISIS gunmen at bay – Anbar province has been on the verge of collapse.

Government forces in the provincial capital Ramadi are still holding out against the ISIS offensive. But U.S. officials yesterday warned that the city was in a “tenuous” position.

“I think it’s fragile there now,” said one senior US defence official, speaking to AFP.

“They are being resupplied and they’re holding their own, but it’s tough and challenging.”

The surge of jihadi activity has also led to speculation that the group’s operation in Kobane was part of an elaborate decoy mission orchestrated by Abu Bakr Al-Baghdadi, the ISIS “caliph.” Observers point out that while the capture of Kobane would not greatly increase ISIS’s military clout, the capture of Ramadi or other cities in Anbar would be catastrophic both for the Iraqi government and Western hopes of attempting to contain the group.

Most of the Euphrates valley – which runs south east from Turkey through Syria, into Iraq and towards the capital – is now under ISIS control. Were Ramadi to fall, jihadi commanders would control a vital supply chain running from Baghdad directly back to their Syrian headquarters in Raqqa. They would also control the Haditha dam, the second largest in Iraq.

“It’s not a good situation,” admitted one U.S. official.

The region of Anbar remains haunted by the ghosts of America’s 2003 invasion.

It was here, a year after the war started, that U.S. troops fought the infamous Battle of Fallujah, an attempt to root out extremists, which was described as one of the most brutal urban conflicts for American marines since Vietnam.

Anbar was also the cradle of the so-called “Sunni Awakening” movement – an attempt by the U.S. to prise Sunni tribal chiefs away from the influence of Islamist insurgents wreaking havoc on occupation troops.

Many had sided with Sunni jihadists, because they feared being sidelined under a government of Shia Muslims, but were won over by power deals or payment.

Their disillusionment over recent years is one of the reasons why ISIS, a Sunni group, has found such favour across vast swathes of Iraq.

If President Barack Obama were to sanction a return of American troops to the province, it would mark a seismic shift in strategy.

Following the bloody nine-year campaign initiated by his predecessor, George W. Bush, the U.S. president made it a cornerstone of his administration’s policy to bring American troops home from the Middle East.

Iraq’s new prime minister, Haider Al-Abadi, has repeatedly refused to countenance the return of foreign troops, while the White House itself has so far stuck to a selective campaign of air strikes.

But rather than silencing calls for a boots-on-the-ground operation, the campaign has so far served to expose the limits of air power against a well-drilled army of battle-hardened militants.

Jets belonging to the U.S.-led coalition have so far launched nearly 2,000 air strikes against ISIS targets, dropping hundreds of bombs on convoys, encampments and other positions. Yet the group’s gunmen march on, both in Kobane and throughout Anbar province. Yesterday, it emerged that one of the reasons the strikes were having only a limited effect was because of the lack of troops on the ground to gather intelligence on targets and then guide the aircraft using laser technology.

Speaking to the Daily Beast website, U.S. pilots warned that air strikes were being compromised as a result.

“The problem is that once you get American boots on the ground… one of those guys gets captured and beheaded on national TV,” said one U.S. pilot.

This week U.S. Apache helicopters were forced to launch air strikes against jihadists west of Baghdad, while yesterday two car bombs were detonated in a northern Baghdad market, killing 13 people.

Some Iraqi officials believe an ISIS assault to take Baghdad is still unlikely, given that about 60,000 government security personnel, including soldiers, police officers, and militiamen, are in position outside the city. But other satellite towns have already fallen, giving ISIS launching points for suicide attacks and other assaults designed to spread panic among the capital’s residents.

“It’s not plausible at this point to envision [ISIS] taking control of Baghdad, but they can make Baghdad so miserable that it would threaten the legitimacy of the central government,” said Richard Brennan, a former U.S. department of defence policymaker

Similar pleas for international help are being made from Kobane, where Turkish government forces are reluctant to get involved because the Kurdish militias now defending the town against ISIS have close links to the PKK, a Kurdish faction outlawed by Anakara as a terrorist group. Instead, to the immense anger of local Kurds, Turkish forces deployed to within a mile of the Syrian border near Kobane, but have sat idle while the carnage has unfolded.

Recep Tayyip Erdogan, the Turkish president – who has compared the PKK to ISIS – has said he will sanction military action only if the US agrees to a no-fly zone in the Syrian Kurdish region as a way to form a buffer zone in which moderate Syrian rebels can operate. The U.S., while also keen to see the departure of Bashar Al-Assad, the Syrian president, fears that enforcing such a no-fly zone would involve taking on his air defence systems.

Meanwhile, the humanitarian situation in Kobane is deteriorating rapidly, with 700 civilians still trapped by the fighting.

“People are eating stale, two-month-old bread that they have kept in storage,” said Azad Osman, 24, a Kobane man now exiled in Suruc, who said he had been in touch with a female fighter inside the city. “They try to make it edible by pouring water on it to soften it, but now the water is running out. The whole place is like Somalia, no water, no food, no electricity.”