Relatives of lebanese defective soldier urge him to return home 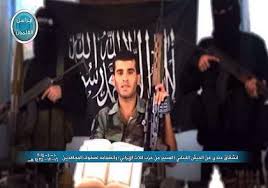 The relatives of the lebanese soldier Abdullah Ahmed Shehadeh, who reportedly defected the Lebanese army and joined the al Qaida linked al-Nusra Front, appealed for him to return to his family and the military institution.

“The military institution is the sole guarantee for the country’s security,” the family said in press conference on Saturday in from the town of Mashha in the northern district of Akkar.

The family urged the Lebanese state to allow “Shehade to return to his country as he is sick and cannot engage in battles.”

Earlier on Saturday, head of Mashha municipality Zakaria al-Zohbi stressed that the “town supports the army,” denying that terrorist organizations are taking it as a safe haven.

“The defection of Shahade is an individual decision… He is the son of a family that loves the military institution,” al-Zohbi said in a statement, expressing surprise over the news.

The municipal chief also denied “rumors and lies that said the army raided the town and clashed with its residents.”

Media reports said on Friday night that Shahade, who hails from the town of Mashha, defected and joined al-Nusra Front hours after the group published a video in which another soldier Mohammed Antar announced that he had “joined the jihadists.”

Shehade is a member of the Fifth Intervention Regiment, while Antar, is from the Rafik Hariri International Airport’s guard platoon. Antar said in his video that “he defected to the extremist group to defend the Sunni community and to protest against Hezbollah’s practices.”

The first time a Lebanese soldier defected to the Nusra Front in neighboring Syria was in July.

Corporal Atef Mohammed Saadeddine claimed in a video that his move came as a result of the injustice against Sunnis in Lebanon.

Al-Jadeed or New TV reported that soldier Abdul Qader Akkoumi, who hails from Akkar’s Fnaideq, has defected to the ISIL.

He announced his defection to the Islamic State group in a YouTube video.

The army said Akkoumi had deserted the military institution three months ago and was referred to the Military Court.