British parliament to vote on recognising Palestine as a state 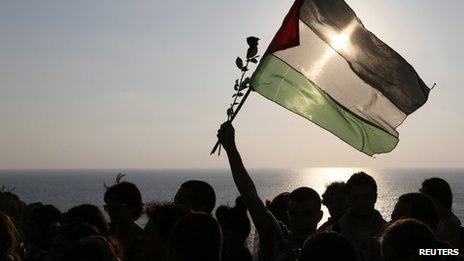 MPs are to take part in an historic vote in Parliament that will call on the government to recognise Palestine as a state.

Labour backbencher Grahame Morris will present the motion on Monday as MPs return to the Commons.

The motion has the full backing of the Labour shadow cabinet, the BBC has been told.

The vote is symbolic and would not change government policy but could have international implications.

Current government policy, as set out by former foreign secretary William Hague, is that the UK “reserves the right to recognise a Palestinian state bilaterally at the moment of our choosing and when it can best help bring about peace”.

Mr Morris’s motion states that “this House believes that the government should recognise the state of Palestine alongside the state of Israel”.

The BBC understands that a group of backbench MPs will attach an amendment to the motion on Monday.

The amendment is expected to add a clause with the words “as a contribution to securing a negotiated two-state solution”.

Sweden’s new centre-left government announced last week that it intends to officially recognise Palestine as a state, becoming the first long-term European Union member state to do so.

It will join more than 100 other countries that have already recognised Palestinian statehood.

A spokesman for the French foreign ministry said this week that recognition would be a positive step at some point in the future.

Israel says moves to recognise Palestine are premature and undermine efforts to reach a peace settlement between the two sides.

Palestinian officials say they have been forced to pursue measures including seeking greater recognition internationally because a succession of peace talks have failed.

They believe greater international recognition will put pressure on Israel.

Labour has twice called on the government – in 2011 and 2012 – to back Palestine’s request for official state recognition at the United Nations.

In 2012, the UN General Assembly voted to upgrade the status of the Palestinians to that of a “non-member observer state”.

The assembly voted 138 to nine in favour, with 41 nations – including the UK – abstaining.

That followed an application to join the international body as a full member state in 2011, which failed because of a lack of support in the UN Security Council, of which the UK is one of five permanent members.

‘Inalienable right’
Shadow foreign secretary Douglas Alexander, writing on the LabourList blog, said: “This conflict will only be resolved ultimately by both sides engaging in a negotiated peace process towards that two state solution.”

A Labour party spokesman refused to say whether the Whips Office would give any guidance on how the party’s MPs should vote.

Mr Morris told the Independent newspaper: “Not only is statehood the inalienable right of the Palestinian people but recognising Palestine will breathe new life into a peace process that is at an impasse.”

It is believed Conservative MPs will have a free vote on the motion and that it has the support of most Liberal Democrat MPs.