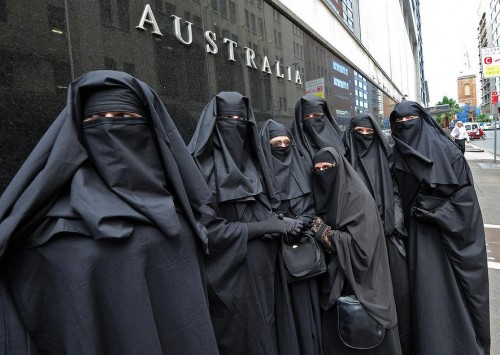 Burqa-clad visitors to Australia’s Parliament will be made to sit in separate glass-enclosed public galleries, a measure designed to thwart attempts to disrupt proceedings that comes amid rising fear of homegrown terror attacks.

Under new rules announced Thursday, anyone wearing a facial covering must sit in areas normally reserved for school groups if they wish to observe Parliament.

The move, which comes as the nation joins the coalition against Islamic State insurgents in Iraq and Syria, follows a debate among lawmakers about whether women should be allowed to wear a burqa in Parliament House in Canberra, Australia’s capital city. In fact, some conservative lawmakers have pushed for a total public ban.

Senate President Stephen Parry told Parliament that the new measures were mainly intended to ensure that anyone interjecting from the gallery could be identified quickly and easily removed.

“If they are asked to be removed from the gallery, we need to know who that person is so they cannot return to the gallery, disguised or otherwise,” he said. Last month, intercepted intelligence allegedly showing that Islamic State supporters may be planning to attack Australian lawmakers prompted a security alert at Parliament House.

The Greens Party said the move was discriminatory. “This decision is a signal to the whole country that it’s OK to treat Muslim women as second-class citizens, and it is not,” said Greens Party leader Christine Milne.

Prime Minister Tony Abbott said Wednesday that he found the burqa a confronting form of attire and wished it weren’t worn in Australia, but “we are a free country, a free society and it’s not the business of government to tell people what they should and shouldn’t wear.”

However, on Thursday he distanced himself from those remarks, saying the burqa issue was hardly the most important facing the country.

Mr. Abbott said that while the government was reluctant to take part in conflicts thousands of miles away, it had been pulled into the fight against Islamic State in the light of intelligence that at least 60 Australians were fighting for terrorist groups in the Middle East and at least 100 more were helping them with money and recruitment.

The government raised its terrorism alert to the second-highest level last month, warning that the first militant attack on home soil was likely as the country prepared to join the international campaign against Islamic State insurgents in Iraq and Syria.

Late last month, an 18-year-old man, identified by authorities as Numan Haider, was shot dead by police after allegedly attacking two police officers with a knife. He had been summoned to a police station in Melbourne to discuss reports he’d been waving an Islamic State flag at a local shopping mall.