Iran tells Hezbollah to change its position over US-led alliance 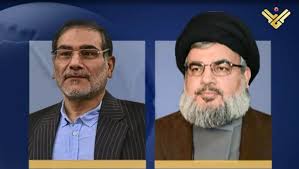 A well informed source revealed to the el-Seyssaeh newspaper that the flash visit of the director of Iran’s Supreme National Security Council Ali Shamkhani to Beirut, a few days ago was aimed to update Hezbollah on the new Iranian position with regards to the US -led international coalition against terrorist organizations in Iraq and Syria, and to give a dose of support for the party’s position in Lebanon, by talking about offering an Iranian grant to the Lebanese army.

The source explained that Shamkhani in his talks in Beirut revealed the actual secret position of Iran which is the endorsement of the air strikes against “ISIS and and “Nusra ,” because Iran believes that defeating “ISIS and and “Nusra , is a very difficult task and way beyond the capabilities of Hezbollah as the recent battles in Qalamoon and Arsal exposed the shortcomings of the party with the help of the Syrian regime in defeating the terrorists .

The source added : “Therefore the new new Iranian instructions to Hezbollah was to to tell it to be positive in dealing with the Lebanese state, which decided to be a non-combatant part of the international coalition . Shamkhani also assured Hezbollah that the Iranian offer of military support for the Lebanese army will not change the balance of power between the army and the party, so that the army remains incapable of constituting any threat to it. ”

According to observers this change in Iran’s position will be a big embarrassment for Hezbollah chief Hassan Nasrallah since he has been attacking the Lebanese position with regards to the alliance ever since it was announced .

Addressing Nasrallah , Geagea asked: “Would you have opposed the international coalition against the IS had Iran been part of it?”

“We know that Iran wanted to be part of the coalition, but complications in the negotiations over its nuclear program hindered it,” he added following talks with National Liberal Party leader Dory Shamoun.

“We know that the U.S. is keen in seeking its own interests, but what if Lebanon and the U.S. have common interests? Would you still oppose the strikes?” Geagea wondered.

“If Islamists staged a new attack against the army in the north eastern town of Arsal, shouldn’t the army request the international coalition for aerial help?” he asked.

“Wouldn’t the failure to request for this assistance be considered as a form of complicity with the Islamists?” Geagea asked in a possible hint that Hezbollah may be colluding with the Islamic State.

Addressing Nasrallah’s remarks that Lebanon would be faced with dangers should it join the international coalition, Geagea asked: “Doesn’t the intervention in the fighting in Syria pose a greater threat to Lebanon?”

“Shouldn’t you have ordered your MPs to head to parliament and elect a new president had you really wanted to build a strong state?” he stressed

The Hezbollah leader said last week that he opposed U.S-led air strikes on Syria, where his Lebanese Shi’ite Muslim group has been fighting alongside forces loyal to President Bashar al-Assad.

Nasrallah, whose group is one of the most important helping Assad fight a Sunni-dominated insurgency, was speaking after the first US led strike against Islamic State (IS) and other groups in Lebanon’s neighbor Syria.

Hezbollah has sent tens of thousands of fighters into Syria’s civil war. Its role in Syria has helped Assad beat back the rebellion against his rule in critical areas of the country including Damascus and a corridor of territory stretching north from the capital. But large parts of Syria’s less densely-populated north and east have fallen to Islamic State.

Prime Minister Tammam Salam said last week after arriving in New York that Lebanon will have a defensive role in the fight against ISIS .

Salam, who is taking part in the 69th session of the U.N. General Assembly was quoted by Al-Arabiya TV as saying :

“ Lebanon is taking part in the war against ISIS from a defensive position because it lacks the military capabilities to be on the offensive.”

“The danger of terrorism is not limited to Lebanon but in the entire region and we are in need of support,” Salam added.