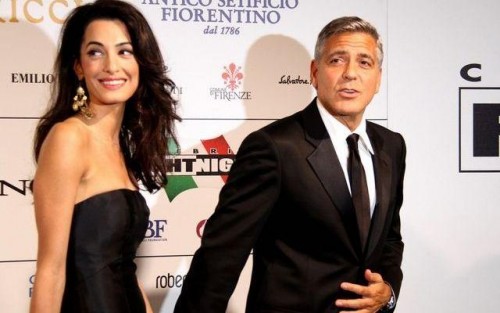 Oscar-winning actor George Clooney, 53, reportedly spent $13 million on his wedding Saturday in Venice to human rights attorney Amal Alamuddin, 36. The Lexington, Kentucky-born star reportedly spent $750,000 on the bride’s engagement ring, which he presented to her in April, seven months after the pair met.

The wedding weekend, which Clooney and Alamuddin decided to turn into a three-day event, kicked off Saturday afternoon when guests were welcomed to the city in private water taxis. Attendees were initially put up at Hotel Cipriani, one of the Oscar winner’s favorite resorts, where a cocktail is named after the star.

ABC News reported friends and family of the couple were then transported via police boats to the seven-star Aman Canal Grande Hotel.

The couple chose a “simple and elegant” floral theme and chose white and yellow as the ceremony colors. It’s rumored the menu consisted of Lebanese and Italian cuisine — and plenty of alcohol, as TMZ reported earlier this week guest Randy Gerber and Clooney shipped 100 cases of their tequila line Casamigos directly to Venice via jet.

Clooney, who was married to actress Talia Balsam from 1989 to 1993, has dated a slew of famous Hollywood celebrities, from Stacy Keibler to Sarah Larson. Despite his track record of dating beautiful actresses, the star openly said he never would marry again. This changed when he met the multilingual Alamuddin, a London-based British-Lebanese attorney last year.

The actor proposed to Alamuddin in late April after seven months of dating, and the couple obtained a marriage license from the Royal Borough of Kensington and Chelsea of the United Kingdom in August.