Obama and Modi call for ‘new US and India agenda’ 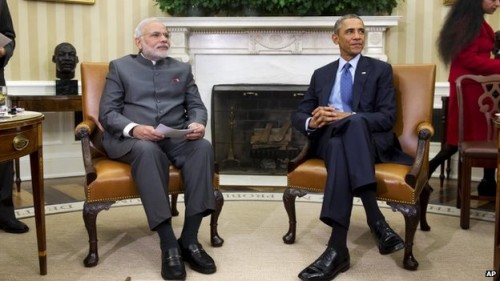 Indian Prime Minister Narendra Modi and US President Barack Obama have called for a “new agenda” between their countries during Mr Modi’s US visit.

The two leaders outlined their agenda for future US-Indian relations in an article, as Mr Modi visited the White House for a second day.

“The true potential of our relationship has yet to be fully realised,” they wrote in the Washington Post.

Ties between the two countries have been strained in recent months.

Among the contentious issues are India’s refusal to sign a global trade deal, a row over alleged American surveillance on the governing Bharatiya Janata Party (BJP), and a diplomatic spat involving an Indian envoy to the US.

Mr Obama hosted a dinner for the Indian prime minister on Monday, despite Mr Modi not eating as part of a nine-day religious fast.

On Tuesday, the US president praised Mr Modi’s time in office, including his focus on addressing “the needs of the poorest of the poor” and India’s regional role.

Mr Modi said he had invited Mr Obama to India and pressed him for more openness and ease of access for Indian companies in the US.

“We already have the foundation of a strong partnership,” Mr Modi said, according to the English translation of his remarks.

“We now have to revive the momentum and ensure that we get the best out of it for our people and the world.”

After their remarks at the White House, the two leaders visited the Martin Luther King Jr memorial. The US civil rights leader was inspired by Mahatma Gandhi’s civil disobedience tactics.

A two-day White House visit for a foreign leader is rare, but the trip is Mr Modi’s first to America since being elected in May, after the US lifted a visa ban brought on grounds of religious intolerance.

The former chief minister of the state of Gujarat has always denied wrongdoing during riots in 2002, in which more than 1,000 people, most of them Muslims, were killed.

In Tuesday’s joint opinion piece in the Washington Post, Mr Modi and Mr Obama said the world’s two largest democracies were “bound by common values and mutual interests” and hailed prior examples of India-US co-operation.

But “the true potential of our relationship has yet to be fully realised,” the leaders wrote.

“The advent of a new government in India is a natural opportunity to broaden and deepen our relationship,” they said, adding they would work on manufacturing, renewable energy and the environment, sanitation, and intelligence sharing, among other issues.

Mr Modi’s visit also included a stop in New York, where he spoke to a crowd of tens of thousands, many of them Indian-Americans, at Madison Square Garden and met top US business leaders.

Analysts say Mr Modi’s visit has generated huge excitement among Indian-Americans who believe that he could help to portray India as a rising global power.