Afghan president-elect promises unity and an end to corruption 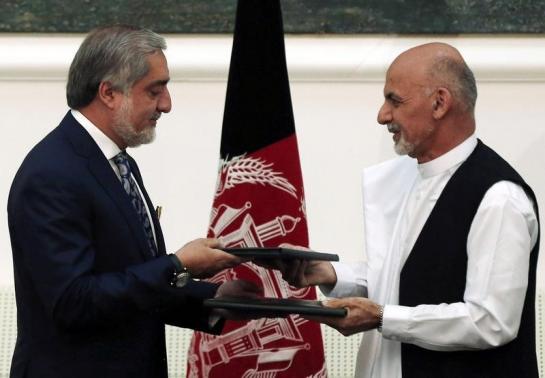 Afghan rival presidential candidates Abdullah Abdullah (L) and Ashraf Ghani exchange signed agreements for the country’s unity government in Kabul September 21, 2014. REUTERS/Omar Sobhani
Share:
Afghanistan’s president-elect promised to end political strife and corruption in a speech on Monday, his first since signing a power-sharing agreement with his rival aimed at bringing months of turmoil to a close.

“Afghanistan’s stability is most important for us,” former finance minister Ashraf Ghani said in his address at the presidential palace in Kabul. “Let’s build up this nation and put the past behind us.”

Ghani was named president-elect on Sunday after he signed a U.S.-brokered deal to share power with his opponent, former foreign minister Abdullah Abdullah.

Abdullah had complained of mass vote-rigging in June’s run-off ballot, and the rivalry threatened to destabilise the country just as most foreign troops prepare to leave.

Under the terms of the unity deal, Ghani will share power with a chief executive proposed by Abdullah. The two will share control over who leads key institutions such as the army and other executive decisions.

Ghani’s administration must now forge a government after much acrimony as well as deal with an emboldened Taliban insurgency.

The Taliban on Monday dismissed the agreement for a unity government as a “sham” orchestrated by the United States, and they vowed to press on with their war against the Afghan government and U.S. and allied forces backing it.

“Installing Ashraf Ghani and forming a bogus administration will never be acceptable to the Afghans,” Taliban spokesman Zabihullah Mujahid said in a statement emailed to journalists.

“The Americans must understand that our soil and land belong to us and all decisions and agreements are made by Afghans, not by the U.S. foreign secretary or ambassador,” he said.

“We reject this American process and vow to continue our jihad until we free our nation from occupation and until we pave the way for a pure Islamic government.”

The Taliban ruled Afghanistan with their extreme interpretation of sharia law for five years before being toppled in 2001 with U.S. military support for sheltering al Qaeda’s leaders behind the Sept. 11 attacks in the United States.

Nearly 13 years on, the United States and outgoing President Hamid Karzai have separately attempted to start peace talks with the resurgent Taliban, but the negotiations have seen little progress.

The United States strongly pushed for the power-sharing deal between Ghani and Abdullah in order to break the election deadlock, fearing it could spark violence between supporters of the candidates who draw their support from ethnic groups that fought a civil war in the 1990s.

U.S. Secretary of State John Kerry telephoned the rival candidates for weeks to coax them towards compromise and President Barack Obama also appealed for a unity deal.

A senior U.S. official said that Ghani and Abdullah, both pro-Western technocrats with similar political platforms, would be able to come together for the sake of the country despite the bitterness of the last three months.

“Our focus will be on merit in every sector of the government, and there will be no place for nepotism,” Ghani said in his speech. “It will be a government of transparency, accountability and taking responsibility.”

One of Ghani’s first acts is likely to be to sign a long-delayed security agreement with the United States. He has previously declared support for the pact to allow a small force of foreign troops to remain in Afghanistan after 2014.

Many people in Kabul fear instability could be exploited by the Taliban, who have made significant gains in the south and east, taking advantage of gaps in U.S. air support during this summer’s fighting season.

A U.S. official in Kabul said the deal to end the election dispute was far from ideal, but preferable to many alternatives that could pose a greater threat to stability.

Some Afghans worry the competing interests of powers that seek influence in their country – including Iran, Pakistan and India – may play into how the U.S.-brokered deal works out, a complaint often raised by outgoing President Karzai.