Panetta: US paying the price for not arming Syrian rebels 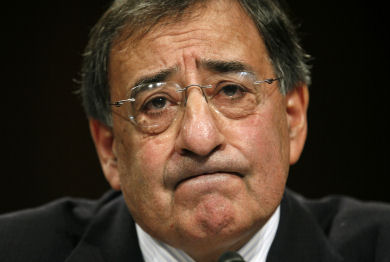 Former Secretary of Defense Leon Panetta said Sunday that he believes the Islamic State terror group was able to flourish in part because the U.S. entered the conflict in Syria too late, saying the Obama administration should have armed the country’s moderate rebels earlier.

Panetta, who served in the Obama administration from July 2011 to February 2013, said in an interview on CBS News’ “60 Minutes” that he was in support of arming the moderate Syrian rebels in 2012, along with several other members of the administration.

“I think that would’ve helped,” Panetta said. “And I think in part, we pay the price for not doing that in what we see happening with ISIS.”

According to CBS News, Panetta writes in his new book “Worthy Fights” that he, then-Secretary of State Hillary Clinton, the director of the CIA and the joint chiefs chairman all urged Obama to arm the rebels at a 2012 meeting.

“The real key was how can we develop a leadership group among the opposition that would be able to take control,” Panetta said. “And my view was to have leverage to do that; we would have to provide the weapons and the training in order for them to really be willing to work with us in that effort.”

However, Obama decided against it.

“I think the president’s concern, and I understand it, was that he had a fear that if we started providing weapons, we wouldn’t know where those weapons would wind up,” Panetta said. “My view was, ‘You have to begin somewhere.’”

Panetta also discussed the war in Iraq; saying that when the U.S. withdrew from the country in 2011 he was not confident pulling out was the right decision.

“I really thought that it was important for us to maintain a presence in Iraq,” he said. “The decision was that we ought to at least try to maintain 8,000 to 10,000 U.S. troops there, plus keeping some of our intelligence personnel in place, to be able to continue the momentum in the right direction. And frankly, having those troops there I think would’ve given us greater leverage on (former Iraq Prime Minister Nouri al Maliki) to try to force him to do the right thing as well.”

Panetta said he believes the Islamic State is a real threat to America, and will take a “long time” to destroy.

“I think they are a threat,” he said. “I think they’re as dangerous, as fanatical, as, as terrorist as Al Qaeda was. They have a large number of foreign fighter with foreign passports that make them particularly dangerous to the safety of this country.”

Panetta is not the first former member of the Obama administration to publicly state they were against Obama’s Syria policy.

Last month, Clinton said during an in-depth interview with The Atlantic magazine the “failure” to help build up a credible fighting force from among those who started the protests against Syrian President Bashar al-Assad “left a big vacuum, which the jihadists have now filled.”

In response, Deputy National Security Advisor Ben Rhodes told Fox News Obama had specific reasons for handling the situation the way he did.

“But the reason that the president was very deliberate in his decision making there is one, we wanted to make sure that we were providing assistance to people who we knew, so that it wouldn’t fall into the wrong hands given how many extremists were operating in that area,” he said. “And two, we didn’t see a plan that was going to decisively tip the balance against Assad.”