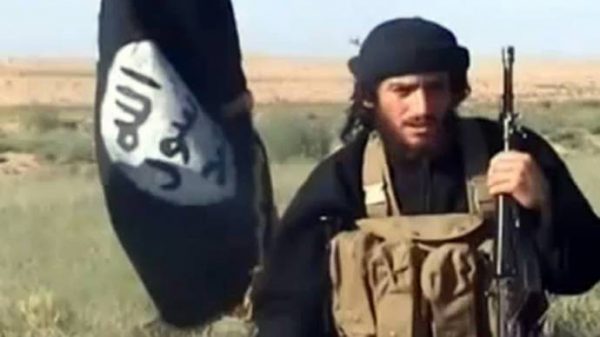 They call John Kerry “the old uncircumcised geezer” and Obama “the mule of the Jews”and take on his lecturing on Islam:

So America and its allies rose in order to save the world from the “terrorism and barbarity of the Islamic State” as they allege. They rallied the entire global media, driving it with false arguments to delude the masses and lead them to believe that the Islamic State was the root of evil and the source of corruption, and that it was the one killing and displacing the people, arresting and murdering those who are “peaceful,” demolishing houses, destroying cities, and terrorizing the women and children who were previously safe. The media portrayed the crusaders as good, merciful, noble, generous, honorable and passionate people who feared for Islam and the Muslims the “corruption and cruelty of the khawārij (a deviant, extremist sect) of the Islamic State” as they allege. To the extent that Kerry, the uncircumcised old geezer, suddenly became an Islamic jurist, issuing a verdict to the people that the Islamic State was distorting Islam, that what it was doing was against Islamic teachings, and that the Islamic State was an enemy of Islam.

And to the extent that Obama, the mule of the jews, suddenly became a sheikh, mufti (Islamic scholar that issues verdicts), and an Islamic preacher, warning the people and preaching in defense of Islam, claiming that the Islamic State has nothing to do with Islam. This occurred during six different addresses he made in the span of a single month, all of them about the threat of the Islamic State.

They turned into Islamic jurists, muftis, sheikhs, and preachers, standing up for Islam and the Muslims, so it appears that they no longer have confidence in the ability or sincerity of their sorcerers in the various committees of senior scholars working for the rulers – committees of the supporters of the tawāghīt (rulers ruling by manmade law).

Dear Muslims, America hasn’t come with its crusade in order to save the Muslims, nor does it spend its wealth in spite of the collapse of its economy and burden itself in order to arm and train the sahwah councils in Shām and Iraq out of compassion and fear for the mujahidin from the “cruelty of the khawārij,” and out of support for them as they allege.