Kurds issue new call to arms against I.S. in Syria 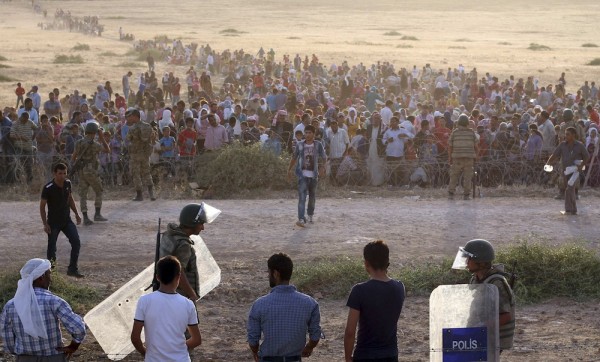 Turkish security forces stand guard as Syrians wait behind the border fences in Sanliurfa province. Turkey opened a stretch of the frontier yesterday after Kurdish civilians fled their homes, fearing an imminent attack on the border town of Ayn al-Arab, known as Kobani in Kurdish. – Reuters pic, September 20, 2014. –
Share:

Kurdish militants in Turkey have issued a new call to arms to defend a border town in northern Syria from advancing Islamic State fighters, and the Turkish authorities and United Nations prepared on Sunday for a surge in refugees.

About 70,000 Syrian Kurds have fled into Turkey since Friday as Islamic State fighters seized dozens of villages close to the border and advanced on the frontier town of Ayn al-Arab, known as Kobani in Kurdish.

A Kurdish commander on the ground said Islamic State had advanced to within 15 km (9 miles) of Kobani, whose strategic location has been blocking the radical Sunni Muslim militants from consolidating their gains across northern Syria.

A Kurdish politician from Turkey who visited Kobani on Saturday said locals had told him that Islamic State fighters were beheading people as they went from village to village.

“Rather than a war this is a genocide operation … They are going into the villages and cutting the heads of one or two people and showing them to the villagers,” Ibrahim Binici, a deputy for Turkey’s pro-Kurdish HDP, told Reuters.

“It is truly a shameful situation for humanity,” he said, calling for international intervention. Five of his fellow MPs planned a hunger strike outside U.N. offices in Geneva to press for action, he said.

Islamic State has seized at least 64 villages around Kobani since the onslaught started on Tuesday, using heavy arms and thousands of fighters. It executed at least 11 civilians on Saturday, including at least two boys, the Observatory said.

The Kurdistan Workers Party (PKK), a rebel group which has spent three decades fighting for autonomy for Turkey’s Kurds, renewed a call for the youth of Turkey’s mostly Kurdish southeast to rise up and rush to save Kobani.

“Supporting this heroic resistance is not just a debt of honour of the Kurds but all Middle East people. Just giving support is not enough, the criterion must be taking part in the resistance,” it said in a statement on its website.

“ISIL (Islamic State) fascism must drown in the blood it spills … The youth of North Kurdistan (southeast Turkey) must flow in waves to Kobani,” it said.

Hundreds of people gathered in solidarity for a third day on the Turkish side of the barbed wire border fence near the town of Suruc, where many of the refugees have crossed. Security forces trying to maintain order fired tear gas and water cannon and some protesters started throwing stones at them in frustration.

The United States has said it is prepared to carry out air strikes in Syria to stop the advances of Islamic State, which has also seized tracts of territory in neighbouring Iraq and has proclaimed a caliphate in the heart of the Middle East.

U.S. forces have bombed the group in Iraq at the request of the government, but it is unclear when or where any military action might take place in Syria, whose president, Bashar al-Assad, Washington says is no longer legitimate.

A radio station broadcasting from Kobani played patriotic Kurdish songs about heroic fighters and martyrs, which residents in Turkey listened to in their cars. Recordings were also played of PKK commander Murat Karayilan as announcers sought to drum up support for the call to arms.

The United Nations refugee agency (UNHCR) and the Turkish authorities said they were preparing for the possibility of hundreds of thousands more refugees arriving in the coming days.

“This massive influx shows how important it is to offer and preserve asylum space for Syrians as well as the need to mobilize international support to the neighbouring countries,” said António Guterres, the U.N. High Commissioner for Refugees.

Kurdish forces have evacuated at least 100 villages on the Syrian side since the militants’ onslaught started on Tuesday.

Iraqi Kurdish leader Masoud Barzani called on Friday for international intervention to protect Kobani from the Islamic State advance, saying the insurgents must be “hit and destroyed wherever they are”.

Western states have increased contact with the main Syrian Kurdish political party, the PYD, whose armed wing is the YPG, since Islamic State made a lightning advance across northern Iraq in June.

The YPG says it has 50,000 fighters and should be a natural partner in the coalition the United States is trying to build.

But such cooperation could prove difficult because of Syrian Kurds’ ties to the PKK, a group listed as a terrorist organisation by Ankara, the United States and European Union due to the militant campaign it has waged in Turkey.

The PKK accuses Turkey of covertly supporting Islamic State as part of a strategy to crush Kurdish militancy, and said in its statement that Ankara was collaborating in the attack on Kobani in a “dirty war”.

Ankara has backed Syrian rebel groups fighting Assad but has repeatedly strongly denied any suggestion that it has supported Islamic State or other radical militants, saying they pose a major security threat to Turkey.