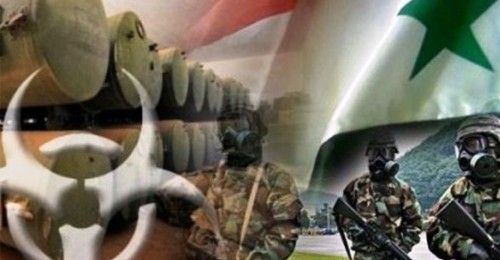 Israel believes Syria has retained caches of combat-ready chemical weapons after giving up raw materials used to produce such munitions under pressure from foreign powers, a senior Israeli official said on Thursday.

Summarising Israeli intelligence estimates that were previously not disclosed to avoid undermining the Syrians’ surrender of their declared chemical arsenal, the official said they had kept some missile warheads, air-dropped bombs and rocket-propelled grenades primed with toxins like sarin.

“There is, to my mind, still in the hands of Syria a significant residual capability … that could be used in certain circumstances and could be potentially very serious,” the official told Reuters on condition of anonymity.

While saying Israel had a “high degree of confidence” in its information, he declined to give figures for chemical weapons allegedly kept by Syria, citing secrecy concerns as well as the possibility some had been destroyed or used by President Bashar al-Assad’s forces.

Israel is an old foe of its northern Arab neighbour and in April 2013 its intelligence service was the first to accuse Assad’s regime of using chemical weapons against areas held by Syrian rebels in the on-going civil war.

Assad agreed to give up the chemical arsenal, which Damascus had previously not acknowledged having. However, he denied his forces had used them and accused rebels of such attacks.

International diplomats told Reuters this week that Syria had revealed a previously undeclared research and development facility and a laboratory to produce the ricin poison.

Those disclosures appeared to support Western assertions in recent months that the Assad regime had not been fully transparent in detailing its chemical weapons programme.

The Israeli official said the 1,300 tonnes of mustard gas and precursors for sarin and VX surrendered by Syria largely matched Israeli assessments of its total stockpile of such materials. The shelf-life of any deployable munitions held back was limited given the chemicals’ deterioration, he added.

Those assessments appear to contribute to overall Israeli relief at the Syrian chemical disarmament, even if Assad has reneged in part. The Israeli official voiced confidence that “our deterrence” – usually a coded reference to Israel’s superior military and assumed nuclear arsenal – would continue to keep Damascus in check.

Using chemical weapons against Israeli targets, even on a small scale, “wouldn’t be a game-changer, it would be a game-ender” for Syria, the official said.

He was less sanguine, however, when asked about the possibility that Islamic State insurgents in Syria and Iraq might get hold of Assad’s remaining chemical weapons.

Israel had no indication that this had happened, he said, indicating Israeli intelligence knew where Assad’s remaining chemical arms were kept and that these sites were still safe – something he declined to confirm or deny directly.

“I haven’t seen any information that they (Islamic State) have received them. I would not be surprised if they are interested, though, in receiving them,” he said.

While using higher-yield munitions like air-dropped bombs might be beyond the insurgents, they could easily launch attacks with “a bunch of grenades with sarin” if this became available, the official added. He noted Israel’s concern at the entrenchment of Islamist rebels along its ceasefire line with Syria in the occupied Golan Heights.

According to regional sources, Israel has on several occasions bombed sites in Syria to thwart the suspected handover of conventional weapons from Assad to allied Lebanese Hezbollah guerrillas. Israeli officials have not formally confirmed carrying out the strikes but say they are poised to take similar action to prevent insurgents getting chemical weapons.

“When we have seen things that we are concerned about, whatever has been done has been done, and that’s it. We have been very careful not to be sucked in. So that policy will continue,” the Israeli official said.