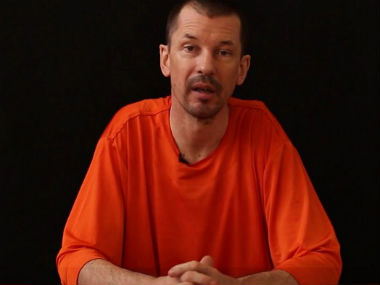 An image grab taken from a video released by the Islamic State (IS) group through Al-Furqan Media via YouTube on September 18, 2014, allegedly shows British freelance photojournalist, John Cantlie, at an undisclosed location. AFP
Share:
A dramatic change of tone in the latest hostage video released by the Islamic State has convinced experts that the jihadist group is isolated and fearful of a US assault.

Where three previous clips ended with a masked militant slitting the throat of a kneeling hostage, the new release Thursday — a teaser trailer for a promised series of documentaries — takes a different tack.

The hostage, British photojournalist John Cantlie, sits behind a desk and in a measured tone makes the case for Western powers to drop the threat of military intervention against his captors.

He admits he is speaking as a prisoner and that he may yet follow his former cellmates to the grave, but urges viewers to tune in to a series of films that will reveal another side of the Islamic State group, which has rampaged across large areas of Iraq and Syria.

The video shares the polished production values of its predecessors but none of the blood-soaked savagery, a telling detail for analysts. Professor Peter Neumann, director of the International Centre for the Study of Radicalisation and Political Violence at King’s College London, said the militants had provoked a backlash.

“They were so brutal and made it so easy for Western governments to portray their enemy as completely barbaric people that need to be destroyed,” he told AFP. “And now they are doing the exact opposite. Now they are saying: ‘We are reasonable people, if Western governments would just talk to us, then everything could be resolved quite easily.'”

Neumann doubts the change in tactics will damage Western resolve, with US President Barack Obama vowing to crush the jihadists. Previous hostage videos and the jihadists’ brutal behavior in the patch of Iraq and Syria they control have cemented their image.

But Neumann said the change in tone appeared to be a calculated attempt to sow seeds of doubt in the minds of those in the West and the Muslim world who opposed previous US-led interventions in the Middle East.

“There’s not as much opposition against striking ISIS as there was, for example, against the Iraq war in 2003, and that’s because we look at ISIS and think they are crazy,” he said, using an alternate acronym for the IS group.

“I see perhaps how this video perhaps appeals to some people on the anti-war left, people who are suspicious of war and military intervention,” he added. “They will be saying: ‘Look! They are not completely crazy. We can give talking, negotiation a chance before going in bombing.’ And I think that’s exactly what they want to achieve.”

Cantlie says the upcoming films will show how the decision of European governments to negotiate with the IS group led to their nationals being released.

British and American hostages have not been released and three have been murdered. A fourth, British taxi driver Alan Henning, was threatened with death in the last execution video. London and Washington have a policy of not paying ransoms to those they regard as terrorists, and the latest video appears to be aimed at driving a wedge between Western capitals.

Henning was a driver for an aid convoy to Syria supported by Islamist groups, and many Muslims have appealed to his captors to release him, including some that might otherwise back the group. Neumann said the convoy included a “lot of guys who basically support Al-Qaeda” and that IS may be concerned that its reckless brutality has cost it support even in such quarters.

But if the Cantlie video is one sign of IS perhaps adopting a new tone to avoid isolation, the key will be Henning’s fate.

“All these executions have happened on a 10- to 14-day rhythm. If there’s no execution of Alan Henning in a week’s time, I think we can be almost certain it has caused them to think,” Neumann said. “He’s kind of like the least likely imperialist that you could possibly think of. If they execute him, then I think that’s the sign that they really don’t care, and all this is a big charade,” he said.

Rita Katz, director of the SITE Intelligence Group — which monitors extremist activity online — said the video showed that the IS group is terrified of US intervention.

She said the change in tone in the latest IS video recalled a similar transition in Al-Qaeda’s portrayal of its late leader Osama bin Laden. Before 2007, bin Laden often appeared dressed in combat fatigues and toting a gun, threatening the West with violent revenge.

Later, as US forces and allies targeted Al-Qaeda safe havens, he appeared unarmed, speaking gently in civilian garb “like a head of state.”

“There’s no doubt in my mind that ISIS is very afraid of a US-led military operation against it,” Katz said. “First they tried to terrorise with beheadings, now they want to create the perception in the international community at large, both Western countries and Muslims, that they are not incapable of civilised behaviour.”

Katz also dismisses claims from some commentators that the videos are an attempt to goad Washington to attack, and argues that they are instead a crude attempt to deter strikes. “From the first days after they captured Mosul (in Iraq), as the calls and threats of intervention were heard in Washington, IS issued videos straight away threatening Obama,” she said. “When that did not work, they moved on to the execution videos. Only a US-led coalition can stop them, and that is something that they want to stop in any shape or form.”