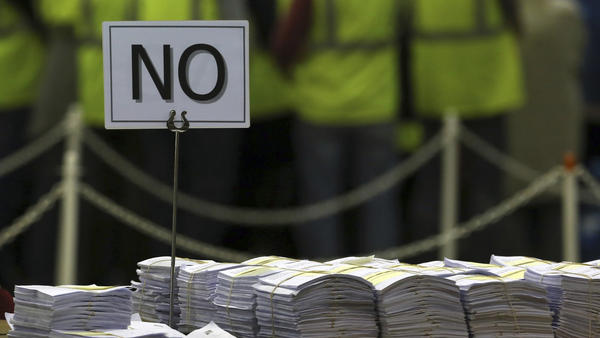 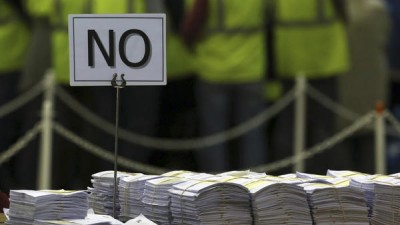 Voters in Scotland rejected independence from Britain, opting to preserve a more than 300-year-old union in a referendum Thursday that sent shock waves through Europe and opened the door to continuing political tumult in Britain.

With turnout averaging 85%, voters dealt a decisive blow to the controversial ballot measure that would have ended Scotland’s union with England, Wales and Northern Ireland.

The independence measure was losing in all-but-final returns with 55% voting against independence, compared with 45% voting “yes.”

The outcome was a blow to First Minister Alex Salmond and his Scottish National Party, which pushed for the referendum when it won a majority in the Scottish regional parliament in 2011.

“Let us not dwell on the distance we have fallen short,” Salmond said in a concession speech early Friday. “A movement is abroad in Scotland that will take this nation forward, and we shall go forward as one nation.”

Deputy First Minister Nicola Sturgeon called the projected result “a deep personal and political disappointment,” but told the BBC that “the country has been changed forever.”

Independence has been a long-cherished goal for Scottish nationalists. But while the result was not going in the direction they had hoped, Scotland in any case is still poised to wrest more powers from the central government in London. Hoping to win over disaffected Scots, the three main political parties in Britain have promised to turn over more control over tax policy and public spending to the semiautonomous government in Edinburgh.

Thursday’s referendum sparked intense interest in Scotland, where an average about 84% of the 4.2 million registered voters cast ballots, one of the highest turnouts Scotland has ever recorded. They included 16- and 17-year-olds, who were allowed to vote for the first time.

Opinion polls showed a close race leading up to the ballot. Scotland’s pro-independence camp closed a gap of more than 20 percentage points in the campaign’s final months.

But Scotland’s pro-union “Better Together” campaign focused voters’ attention on the risks of independence. Much of the debate centered on economic concerns, such as how long Scotland could depend on tax revenue from dwindling oil and gas reserves in the North Sea and questions over what currency an independent Scotland would use.

Nationalists said they wanted to keep the British pound, but the government in London consistently ruled out a currency union if voters chose to break from the United Kingdom.

Ballots arrive to be counted at the Aberdeen Exhibition and Conference Center in Aberdeen, Scotland.
John Curtice, a political scientist at Scotland’s University of Strathclyde, said the no vote if it holds means the rest of Britain can breathe a sigh of relief.

“Awkward issues, such as what do we do with our nuclear weapons facility don’t have to be faced,” Curtice said. “The potential damage to the UK’s prestige…is removed.”

Britain has a fleet of nuclear-armed submarines based 25 miles down river from Glasgow. Salmond and his party had vowed to make Scotland free of nuclear weapons within four years of independence, and the British government could have been faced with the costly task of relocating its Trident naval base.

Some former British military chiefs had argued that even a temporary loss of Britain’s nuclear weapons capability would have been destabilizing, possibly undermining the country’s position in the North Atlantic Treaty Organization and the United Nations Security Council.

For Jeremy Thornton, the decision on how to vote was a difficult one.

“Up until recently I was a firm ‘no’ voter,” he said outside his local polling place in central Edinburgh. He said he initially believed that independence was too risky a proposition. But the benefits started to look appealing, he said, noting that Scotland’s government would be more directly elected.

“I think you should be able to vote for the government that rules you,” Thornton said.

Anna Wright said she voted no, fearing the economic risks of independence were too great. “I was wavering a little bit, because I think [it’s good to]…be able to govern yourself a bit more,” she said. “But at the same time, I think Alex Salmond didn’t really have the plans in place.”

The referendum also attracted supporters of other separatist movements, near and far. Aran Jones drove to Edinburgh from Wales to volunteer for the “yes” campaign. Marie-Jose Laforest came from Quebec, Canada. And Montse Berdura arrived from a small town near the Spanish city of Barcelona. “If Scotland gets independence, it will be easier for Catalan people to be independent,” Berdura said.

Former British Prime Minister Gordon Brown, a native of Scotland who remains a member of the British parliament, has laid out a swift timetable for more devolution of authority to Scotland. However, Britain’s main political parties have yet to agree on what exactly the that will entail.

Vernon Bogdanor, a British constitutional expert at King’s College London, says granting greater autonomy to Scotland will spark debate over whether England should also have its own parliament, as do Wales and Northern Ireland.

“It’s awakening English nationalism, which has been hitherto almost non-existent,” Bogdanor said. “English [members of parliament], pressed by their constituents, have already said, ‘Well, what about England?’ And there’s some pressure for devolution in England.”

While the opposition Labor Party welcomes Scotland’s “no” vote, Michael Keating, a political scientist at the University of Aberdeen, said the referendum should be a “wake up call” to the party. Labor holds 41 of Scotland’s 59 seats in the British Parliament. “They’re going to have to rethink their position in Scotland and how to get a distinctive Scottish profile,” he said.

Independent or not, Scotland has been transformed by the referendum, said Keating.

“Everybody in this society has gained because we had this serious debate, which hasn’t been divisive, and it involved rather intelligent discussions about very complicated issues,” Keating said.

“There’s been an extraordinary politicization of the society, so the politics between Scotland and the UK will never be the same again.”