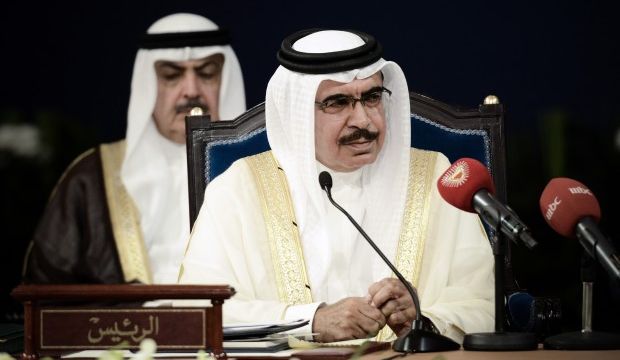 Bahraini Interior Minister Sheikh Rashid Bin Abdullah Bin Hamad Al Khalifa
Share:
Bahrain warned on Wednesday it was ready to take serious counter-measures against Qatar over Doha’s alleged policy of offering Qatari citizenship to Bahraini nationals, in a development that will further heat up already tense relations between Qatar and its Gulf neighbors.

In a statement carried by the state-owned Bahrain News Agency, Interior Minister Sheikh Rashid Bin Abdullah Bin Hamad Al Khalifa said Qatar’s recent conduct was inconsistent with the spirit of the Gulf Cooperation Council (GCC)—which in addition to Bahrain and Qatar also includes Saudi Arabia, Oman, Kuwait and the United Arab Emirates (UAE)—and maintained that if Doha’s “unfriendly and humiliating” policy of targeting Bahraini citizens continued, Manama would be “obliged to take counter-actions that we have never wanted to [take].”

This constitutes Doha’s third warning in two months from Manama over the former’s alleged targeting of Sunni Bahraini citizens—offering them Qatari nationality and asking them to give up their original Bahraini nationality.

Manama issued two previous warnings on Tuesday and August 7, and also passed a law on August 14 that imposes fines on Bahraini citizens who take on nationalities of other countries without the permission of the relevant authorities.

Bahrainis are allowed to take on other Gulf nationalities, but only after permission is granted from the minister of interior. Members of the military are barred from taking on any other nationalities until at least five years after their service has been completed or terminated.

Sources with knowledge of the developments told Asharq Al-Awsat that Qatar had successfully naturalized “hundreds” of Bahraini citizens belonging to prominent Sunni families, many of them members of the military and security professions.

The sources, who requested anonymity, said the issue of Qatar targeting Bahraini citizens for naturalization was one of the main sticking points during meetings earlier this month between Qatar on one side and Bahrain, Saudi Arabia, Kuwait and the UAE on the other.

Those Gulf countries all withdrew their ambassadors from Doha in March citing Qatar’s interference in their sovereign affairs.

This comes as one Bahraini citizen was arrested for giving up his Bahraini nationality and obtaining Qatari citizenship. The man, Salah Mohamed Al-Jalahma, was later freed after submitting a written apology to the authorities vowing to correct his status in accordance with Bahraini law.

Commenting on the incident, Bahrain’s Interior Minister said: “We know that his family is among some of the most loyal and law-abiding families of Bahrain, who are known for their honorable history and impeccable reputation that does not normally lead to breaking the law, facing detention and several other measures.”

Sheikh Khalid Bin Khalifa Al Khalifa, head of the Foreign Affairs, Defense and National Security Committee in Bahrain’s legislative assembly, told Asharq Al-Awsat that Qatar is “working on demolishing the Bahraini political infrastructure” through its “clear and obvious” targeting of Sunni families in the country.

He said: “The number of Bahraini citizens who have been naturalized [as Qatari citizens] by Qatar is limited. But what is more important here is the act itself—Qatar targeting, luring and inciting Bahraini citizens to abandon their Bahraini nationality.”

Meanwhile, Qatar’s Emir, Sheikh Tamim Bin Hamad Bin Khalifa Al Thani, assured German Chancellor Angela Merkel on Wednesday during an official visit to Germany that his country did not provide any funding for the Islamic State of Iraq and Syria (ISIS), adding that Qatar was also endangered by the group’s presence in the region.

A German minister had recently accused the Gulf country of being one of ISIS’s main financial backers in the region.