Obama reaffirms opposition to US Combat in Iraq 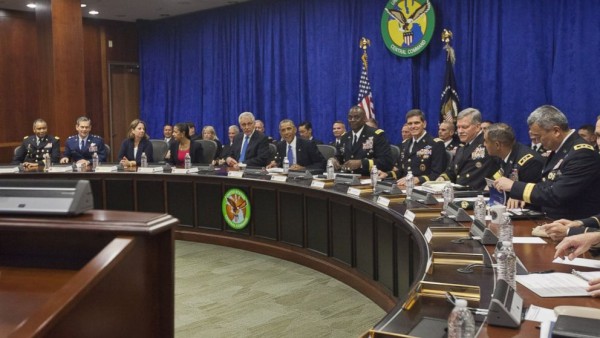 President Barack Obama, center, before the start of a briefing at US Central Command (CentCom) at MacDill Air Force Base, Fla., Wednesday, Sept. 17, 2014. Obama was updated on the ongoing military campaigns in Iraq and Syria. (AP Photo/Pablo Martinez Monsivais) The Associated Press
Share:

The U.S. will not send armed forces to fight a ground war in Iraq, President Barack Obama reiterated Wednesday, a day after his top military adviser said he could envision recommending that the president deploy ground troops there.

“It is more effective to use our unique capabilities in support of our partners on the ground,” Obama told service members at U.S. Central Command in Tampa, Florida. “That is the only solution that will succeed in the long run.”

Gen. Martin Dempsey told the Senate Armed Services Committee on Tuesday that if airstrikes did not end up being effective enough against Islamic extremist group ISIS, he would recommend putting troops in Iraq. Obama has said previously that he would not send in U.S. combat forces.

On Wednesday, Obama said leading a broad coalition of countries united against ISIS and supporting Iraqi troops on the ground is the best route to “degrade and ultimately destroy” the extremists.

“These terrorists will learn the same thing leaders of al Qaeda already know: We mean what we say. Our reach is long. If you threaten America, you will find no save haven. We will find you eventually,” he said, adding that U.S. troops have conducted more than 160 airstrikes against them so far.