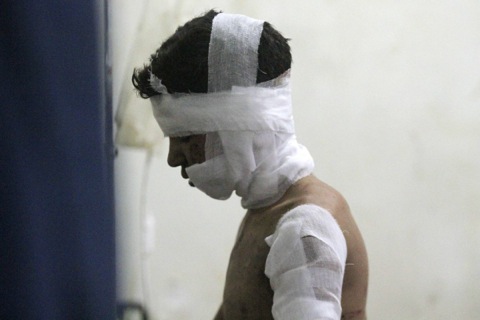 An injured boy rests in a field hospital after what activists claim were two air strikes by forces loyal to Syria’s President Bashar al-Assad in Douma, Syria on Sept. 14, 2014. Badra Mamet—Reuters
Share:

The civil war in Syria had reached new depths of “madness,” United Nations investigators warned at a Geneva briefing on Tuesday in which they presented fresh evidence of atrocities committed by fighters on both sides of the conflict.

“I have run out of words to depict the gravity of the crimes committed inside Syria,” said Paulo Sérgio Pinheiro, who chairs the U.N. investigative panel on Syria, the New York Times reports.

Pinheiro cited evidence of mass killings across territory held by the Islamic State of Iraq and Greater Syria (ISIS) in northeastern Syria, where fighters have executed hundreds of captive Syrian soldiers as well as members of rival tribes. Pinheiro said ISIS fighters encouraged children to attend public executions, including beheadings, stonings and crucifixions.

But the Syrian government remained responsible for the majority of civilian deaths and injuries, Pinheiro said, due to daily shelling and aerial bombardments, as well as mass arrests and widespread torture at the hands of government interrogators. Investigators released a 17-page report that included eyewitness testimony from civilians on the ground. “If you want to know what effect this war has had you must listen to its victims,” Pinheiro said.