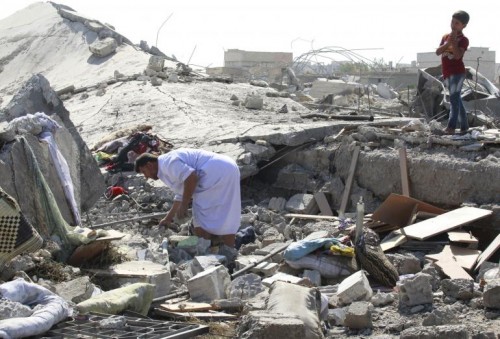 A man looks through the debris of a destroyed building after a Syrian war plane crashed in Raqqa, in northeast Syria on Sept. 16, 2014. Reuters
Share:
A Syrian military aircraft crashed into the de facto capital of the Islamic State group on Tuesday, killing at least eight people, as thousands of residents fled to nearby villages in anticipation of expected U.S. airstrikes against the militants, activists said.

It was not immediately clear whether the plane that slammed into the northeastern city of Raqqa was hit by anti-aircraft fire or experienced a technical failure, according to an activist based in the city and the Britain-based Observatory.

In Damascus, Syrian rebels emerged from underground sewers to attack government troops at dawn, one of very few such infiltration attempts to pass the boundaries of the capital since the conflict erupted three years ago against the rule of President Bashar Assad, activists said.

At least 18 fighters were killed in the southern area of Midan after two groups of rebels crawled into the city through the tunnel network to attack a Syrian government checkpoint, said Rami Abdurrahman of the Britain-based Syrian Observatory for Human Rights.

The fighting lasted for four hours, said an activist based east of Damascus who uses the name Mamoun Ayoubi. The activist said the fighters were trying to relieve pressure on rebels in eastern Damascus.

“This is not a normal situation, the fighting didn’t halt from 3 a.m. to 7 a.m.,” Ayoubi said over Skype.

There has been intense fighting around the eastern edge of Damascus in recent weeks. Rebels have been lobbing mortars into the capital, killing civilians, and clashing near the government-controlled neighborhood of Jaramana. Syrian government aircraft have bombed nearby towns, apparently in reprisal, killing at least dozens of civilians.

The rare clash in Damascus came after another failed rebel attempt Monday to infiltrate the capital. That attempt was reported by state-run media and an activist.

More than 190,000 people have been killed since the start in 2011 of Syria’s conflict, which has transformed into a multilayered civil war.

The Islamic State group now controls a proto-state that stretches from northern Syria across much of northern and western Iraq. Raqqa, an ancient city on the Euphrates River with a prewar population of 500,000, serves as the extremists’ stronghold in Syria.

The plane that crashed into Raqqa killed at least eight people, including members of two families after the aircraft plowed into their home, according to a Raqqa-based activist who goes by the name Fourat Alwfaa. The Observatory reported were casualties, but did not have a concrete figure.

The U.S. has been conducting airstrikes against Islamic State fighters in Iraq since the militants tried to push toward the northern city of Irbil in Iraq’s largely autonomous Kurdish region in August. President Barack Obama last week authorized strikes against the group in Syria as well, and his administration is currently trying to cobble together an international coalition to go after the group.

As international attention has zeroed in on the extremists, the Syrian government, which largely shied away from bombing the group’s territory for more than a year, has begun targeting cities and towns under the militants’ control more frequently.

On Tuesday, there were at least seven airstrikes on the city.

Those government strikes, and the prospect of an American-led aerial campaign that is all but certain to target Raqqa, have prompted many residents to pack up and move to outlying villages, according to Alwfaa and another resident.

“By God, yes, people began fleeing about a week ago,” said a woman who requested anonymity, fearing identification by the militant group. She said they fled to nearby villages, away from the militant group’s bases.

Also Tuesday, an explosive-rigged vehicle blew up near a northern border crossing with Turkey, killing three people, according to a local activist, Abu al-Hassan, and the Observatory.

Abu al-Hassan said the vehicle appeared to have exploded prematurely, some 500 feet (150 meters) before it reached the Bab Salama crossing, avoiding further casualties. An explosion in May at the frontier there killed at least 29 people.