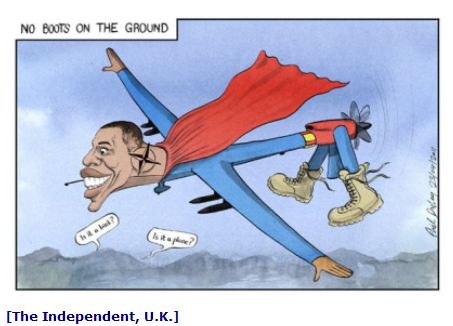 [Campaigns in Somalia and Yemen] have dragged on for years and involve far smaller and less-well-financed adversaries than the Islamic State. Although Obama promised a “steady, relentless effort” in a nationally televised address Wednesday night, he also said that “it will take time to eradicate a cancer like ISIL,” using a common acronym for the Islamic State.

Such a mission was not the U.S. military’s preferred option. Responding to a White House request for options to confront the Islamic State, Gen. Lloyd Austin, the top commander of U.S. forces in the Middle East, said that his best military advice was to send a modest contingent of American troops, principally Special Operations forces, to advise and assist Iraqi army units in fighting the militants, according to two U.S. military officials. The recommendation, conveyed to the White House by Gen. Martin Dempsey, the chairman of the Joint Chiefs of Staff, was cast aside in favor of options that did not involve U.S. ground forces in a front-line role, a step adamantly opposed by the White House. Instead, Obama had decided to send an additional 475 U.S. troops to assist Iraqi and ethnic Kurdish forces with training, intelligence and equipment.

Recommitting ground combat forces to Iraq would have been highly controversial, and most likely would have been opposed by a substantial majority of Americans. But Austin’s predecessor, retired Marine Gen. James Mattis, said the decision not to send ground troops poses serious risks to the mission.