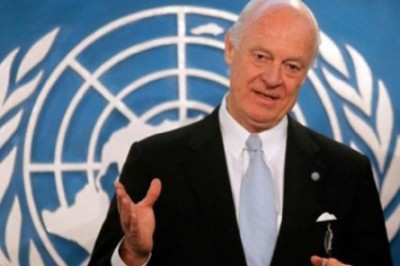 The new United Nations special envoy to Syria began his first visit to Damascus on Tuesday to try end the deadly three-year conflict, while mortar attacks on the capital and a suburb killed at least five people, state news agency SANA said.

Staffan de Mistura arrived in Damascus in the afternoon after crossing by land from neighboring Lebanon. He is accompanied by his deputy Ramzy Ezzedine Ramzy. Both assumed their functions at the beginning of the month.

De Mistura was received by Syria’s deputy Foreign Minister Faisal Mekdad. It was not immediately clear if he will meet President Bashar Assad during his visit.

De Mistura is now the third special envoy tasked with helping to end the yearslong fighting in Syria that the U.N. says has killed more than 190,000 people and displaced some 9 million, a third of the country’s pre-war population. The Swedish-Italian diplomat and his Egyptian deputy were named to the post in July.

De Mistura replaced Lakhdar Brahimi, who resigned on May 31 after nearly two years of failed efforts to end the worsening civil war. Unlike Brahimi, de Mistura is not a joint envoy of the U.N. and the Arab League, which has been deeply divided over the war in Syria. Ramzy was recommended by the Arab League.

The Syrian government had earlier welcomed the nomination of De Mistura.

Brahimi had followed in the footsteps of his longtime friend, former U.N. Secretary-General Kofi Annan, who resigned from the same job in August 2012 after failing to broker a cease-fire as the country descended into war.

A U.N. statement said Monday that the envoy will travel to Damascus for consultations with Syrian officials.

Following this initial visit to Syria, they will embark on a first round of visits to countries in the region, then visits to other capitals in October, followed by a high-level debate in the U.N. General Assembly, it said.

Born in Stockholm, De Mistura, 67, recently served as deputy foreign minister in the Italian government headed by Mario Monti. He speaks seven languages, including colloquial Arabic, according to the Italian Foreign Ministry.

The visit came as activists and state media reported clashes and shelling in different parts of the country including Damascus and its suburbs.

SANA said two people were killed in Damascus and three in the suburb of Jaramana. It added that 15 were wounded in the shelling of Damascus and seven in Jaramana.