Israel test-fired its Arrow interceptor missile jointly with the US 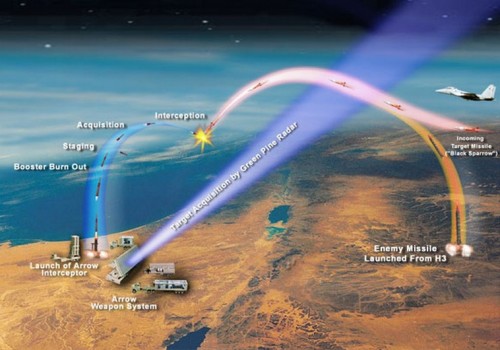 The Israeli military test-fired its Arrow (Hetz) 2 interceptor missile jointly with the US , the Israeli Defense Ministry said Tuesday.

«The interceptor completed all planned flight stages,” the ministry said in a statement.

“The test should study the possibilities of the improved system to counter perspective threats,” the statement reads.

The Russian Defense Ministry said earlier in the day that Russian missile warning systems had detected the launch of a ballistic object in the Mediterranean region at 08:31GMT.

Israeli military experts said that the Russian military had detected either the missile itself or the target drone that it was supposed to hit.

According to The Times of Israel, Tel Aviv is in the process of developing a five-tiered system of air defense aimed at protection against projectiles ranging from mortars to ballistic weapons.

Arrow (Hetz) 2, rolled out in March 2000, is an Israeli interceptor developed to counter ballistic missiles at atmospheric altitudes.

One Arrow 2 interceptor missile is worth between $1.5 million to $3 million. It is part of Israel’s Homa missile defense system created together with US companies.