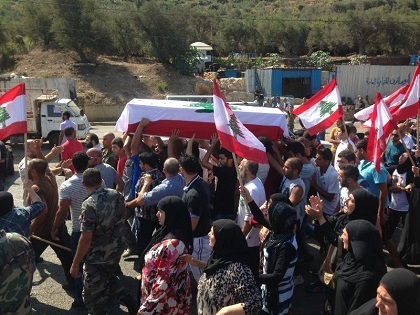 Funeral of Lebanese soldier Al Sayyed who was beheaded by an Islamic State miltant
Share:

The kidnaping and murder of Lebanese security forces by jihadists from Syria has sparked new tensions in Lebanon, including a backlash against Syrian refugees and a string of sectarian kidnappings.

Relatives of the missing soldiers and policemen, who were kidnapped during fierce clashes in the Lebanese border town of Arsal last month, have blocked roads in protest and even carried out counter-kidnaps.

On Monday, a security source said two people from majority Sunni Arsal had been kidnapped by the family of soldier Ali al-Masri.

One of the negotiators involved in the talks aimed at solving the hostage crisis confirmed the report: “The family is asking the people of Arsal to pressure the [jihadist] kidnappers to release their son, and it insists it will not release its hostages until [the soldiers] are free.”

Elsewhere in the majority Shiite Beqaa valley, tit-for-tat kidnappings took place on Monday, according to security sources, who said the army is trying to resolve the spiraling crisis.

The incidents follow confirmation that a second Lebanese soldier being held by jihadists from the Islamic State (IS) has been beheaded.

The hostage crisis and beheadings have inflamed tensions in Lebanon, which is hosting more than 1.1 million Syrian refugees, and where tensions were already soaring over the four-year conflict in Syria.

The crisis has prompted a backlash against Syrian refugees in parts of Lebanon, with tents in informal camps being set alight and hundreds of Syrians sheltered in the Beqaa valley fleeing for fear of attack.

The Syrian conflict has exacerbated existing sectarian tensions in Lebanon, where most Sunni residents back the Syrian uprising and Shiites generally support Syria’s President Bashar al-Assad.

The August fighting in Arsal was the most serious border incident in Lebanon since the Syrian war began next door in March 2011.

With the ensuing hostage crisis unresolved to date despite ongoing Qatari mediation, reports of the soldier’s beheading first emerged on Saturday, prompting angry Lebanese to cut roads with burning tires in protest.

The official National News Agency meanwhile reported that refugees in several camps across the country – especially those in Shiite areas whose residents support Assad ally Hezbollah – had been told to evacuate their tents.

An AFP journalist in the eastern Beqaa valley saw Syrian refugees dismantle their tents and leave in their thousands for northern Lebanon, the west of the Beqaa and Beirut.

Incidents of violence targeting Syrians have also been reported.

George Ghattas, a farmer from the village of Taybeh in the Beqaa valley, told AFP he saw a group of men attacking the Syrian guard of an unfinished construction site.

“The man then fled,” Ghattas said.

In southern Lebanon, Syrian refugees hosted in some 100 tents near the city of Tyre were given 48 hours to evacuate their camp.

“We don’t want to have terror cells developing in big camps,” Burj al-Shimali mayor Ali Deeb told AFP on Monday. “We have given the Syrians living in the camp 48 hours to leave.”

And in Beirut, a witness who spoke to AFP on condition of anonymity said he saw a group of some five young men surround and beat a Syrian man in his early twenties, after they discovered where he was from.

“They started shouting: ‘Are you Syrian or not?'” the witness said, adding that “five or six of the guys started beating him, taking turns to hit him.”

Amid the rise in tensions, the authorities have appealed for calm, calling on the Lebanese to refrain from revenge attacks.

“The Syrian refugees are our family, they asked for our help, so we assisted them,” said Prime Minister Tammam Salam in a televised speech.

Expressing “feelings of sadness and grief” for the suffering of the families of the kidnapped soldiers, Salam said that “what has been happening on the streets in the past few days damages the memory of the martyrs… while plunging the country into deep danger.”

But in spite of the appeal, there was little sign the tensions could be immediately dispelled.

Speaking to AFP, Human Rights Watch researcher Lama Fakih confirmed the spike in violence: “We have seen a string of retaliatory measures against Syrian refugees in Lebanon taken by individuals and municipalities.”