A small group of people pick through putrefying human remains laid out on plastic sheets by the side of a road in northern Iraq, searching for any trace of missing friends and relatives.

Some had brought spades to help dig up the mass grave near Suleiman Beg after the town was retaken from Sunni Islamic State militants who held the area until last week.

“They (Islamic State) slaughtered him simply because he was Shi’ite,” said Jomaa Jabratollah, hauling the remnants of his friend, a truck driver, into a coffin, having identified him from the lighter in his breast pocket. “We must take revenge”.

Helped by the United States and Iran, Kurdish forces and Shi’ite militia are finally beating back Islamic State militants who overran most Sunni Arab areas in northern and centralIraq nearly three months ago.

But the aftermath illustrates the unintended consequences of the U.S. air campaign against Islamic State.

Kurdish and Shi’ite fighters have regained ground, but Sunni Muslims who fled the violence are being prevented from returning home and some have had their houses pillaged and torched.

Rather than help keep the nation together, the air strikes risk being used by different factions for their own advantage in Iraq’s sectarian and ethnic conflicts.

The fallout also risks worsening grievances that helped Islamic State find support amongst Iraq’s Sunnis, and allows the militant group to portray the U.S. strikes as targeting their minority sect. That may make it more difficult to bring Sunnis on side and convince them to fight the militants. 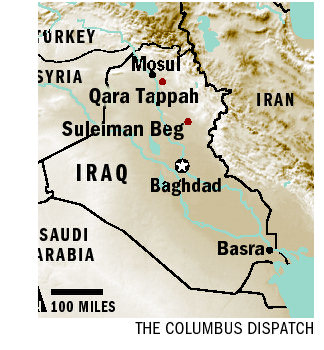 The unlikely coalition of Kurdish peshmerga fighters, Shi’ite militias and the U.S. air force won a major victory when it broke a siege of the Shi’ite Turkman town of Amerli last week and drove Islamic State from 25 nearby Sunni towns and villages.

But the aftermath is far from what the Americans envisioned. Smoke now rises from those Sunni villages, where some houses have been torched by Shi’ite militia. Others are abandoned, the walls daubed with sectarian slogans.

“There is no way back for them: we will raze their homes to the ground,” said Abu Abdullah, a commander of the Shi’ite Kataib Hizbollah militia in Amerli.

The area is now held by Kurdish peshmerga and Shi’ite militia, who have become the most powerful forces on the ground, rather than the Iraqi army, whose northern divisions collapsed this summer when Islamic State attacked.

By the time IS was expelled from around Amerli, many Sunni civilians had fled, fearing for their lives. They have few places to go and are too frightened to return.

“If a regular army were holding the area we could return, but as long as the militias are there we cannot,” said a 30-year-old displaced Sunni resident of one village near Amerli, who asked to remain unnamed. “They would slaughter us on the spot.”

He admitted some villagers had supported IS, but said it was only one or two for every 70 to 80 households, and that the rest were innocent civilians who were too scared to stand against the militants or had nowhere else to go.

Sunni Turkman al-Muradli and his family left Suleiman Beg the day after it fell to Islamic State in June and moved to a Kurdish-controlled town nearby. A month later, their 21-year-old son was abducted.

The next time they saw him was in a video on the internet captioned “arrest of an Islamic State member”, which appears to show their son being beheaded by Shi’ite militia fighters.

His weeping mother insisted he was an innocent student and said her son’s killers had phoned her demanding $2,000 to return the corpse without a head, which the caller claimed to have taken to Baghdad as a trophy.

“We cannot return. Even if the Shi’ite army and militia withdraw, Islamic State will come back and the same will happen all over again,” said the mother.

The mayor of Tuz Khurmato confirmed the account and said at least four other Sunnis had been abducted in the area in recent weeks, presumably by Shi’ite militia. At least one other video has circulated online of Shi’ite militiamen brandishing the heads of alleged Islamic State fighters.

A 42-year-old Shi’ite volunteer said it would eventually be safe for Sunnis to return and that no more than ten houses of known Islamic State members had been deliberately destroyed.

“The Sunnis will come back to their villages but not now: after a few months,” he said.

“Since there is no confidence between Sunni and Shi’ite any more, they need guarantees from a third party, maybe the Kurds, then we can live peacefully together again, as we were.”

Sunni Arabs are also feeling a backlash in villages where they used to live alongside Kurds, who accuse them of collaborating with Islamic State.

Kurds, who are also mostly Sunni but identify first and foremost with their ethnicity, have taken back at least 127 villages since the start of the U.S. air campaign, some of which were home to Arabs too.

In one such village, returning Kurds have sprayed over the word “apostate” on the walls of houses and written “Kurdish home” instead. Arab households remain empty.

Kurds in the Makhmour area, from which IS was pushed out in August, say they no longer trust Arabs enough to live with them.

“All my neighbors were Arabs. Now most of them are with Islamic State,” said Abdul Rahman Ahmed Abdullah, a member of the Kurdish security services from the village of Baqirta, south of Arbil. “We cannot be mixed together. The only solution is for them to leave.”

During the operation to reach Amerli, Kurds gave passage to Shi’ite militia through territory they control and allowed them to use their bases, where they fired artillery at IS positions side by side in an unusual show of solidarity.

“Amerli united Iraqis,” said Taleb Jaafar Mohammed, a Shi’ite Turkman teacher, holding a pistol in one hand and a string of prayer beads in the other.

But even during the operation, there were cracks in the coalition: Shi’ite militia and Kurdish forces fought under their own banners and the least visible flag was that of Iraq.

Now that the common enemy has been pushed back, the alliance is unraveling. Kataib Hezbollah, which controls access to Amerli, is denying Kurds entry to the town and one peshmerga commander described the militia as the “Shi’ite IS”.

The tensions reflect a struggle for territory which the Shi’ite-led government in Baghdad claims, but the Kurds want as part of their autonomous region in the north of the country.

“This land is ours: they are an occupying force,” said Sirwan, a Kurdish fighter, when asked about the Shi’ite militia presence. “There will be bigger problems than Islamic State in this area.”