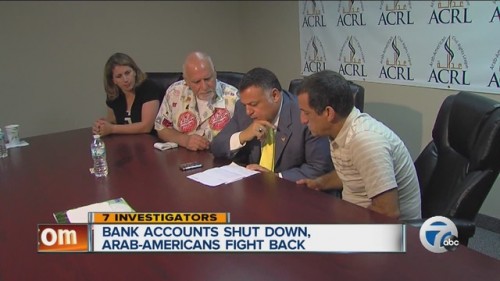 From Washington state to Florida, surprising letters from banks have turned up in the mailboxes of at least a dozen people.

The message in each case: Your bank account is being closed. What frustrates the recipients is not only that they are all of Middle Eastern descent — leading them to suspect discrimination — but that the banks refused to provide the reason for kicking them out.

“We never understood what’s going on,” said AbdulHyee Waqas, who had his Bellevue, Wash., nonprofit group’s account closed. “We had been a good customer. It was very disheartening.”

Last summer, a Minneapolis dentist went so far as to write detailed explanations of all his transactions, hoping that TCF Bank would let him reopen the joint account with his wife and his personal account. The response: Sorry, we’re not interested in your business.

“I don’t see why there would be a red flag on anything I performed,” said the dentist, a Kuwait native who requested anonymity for fear of retribution from his current bank. “Maybe they have something I’m not aware of, but they said they couldn’t say anything.”

A Florida attorney for the Council on American-Islamic Relations has asked the U.S. Department of Justice’s Civil Rights Division to look into the closures and determine whether race is playing factor in the decisions. A Justice Department spokeswoman said the issue was a matter for banking regulators, including the Consumer Financial Protection Bureau.

“The bureau takes seriously any allegations of discrimination in the consumer financial marketplace and is committed to ensuring consumers have fair and equal access to credit,” a bureau spokeswoman said in a statement. But she added: “We cannot confirm or comment on whether any investigation is ongoing.”

Frustrated by the responses from regulators, the Michigan chapter of the Council on American-Islamic Relations is contemplating a lawsuit against banks, said Executive Director Dawud Walid.
TCF Bank did not respond to a request to comment. An official at another bank, declining to comment on the record, called the cases isolated, nondiscriminatory actions that were among thousands of closures that happen annually. While some closures may occur over suspicions of money laundering or terrorism financing, some victims wonder why no charges have been brought if that’s the case.

The Times has verified about a dozen closures involving Muslims, immigrants from the Middle East, and groups such as Council on American-Islamic Relations chapters, but activists say scores more have been affected. Similar concerns emerged in London this summer.

Banking experts say that as banks have faced increasing scrutiny from regulators in a post-recession world, they are eliminating as much risk as possible. Lacking clarity on what might trigger government fines, banks are being overly cautious, some experts say.

“It’s not inconceivable to think an Islamic American or Arab American would be closed due to their perceived higher risk because of their connections to high-risk jurisdictions,” said Brian Kindle of the Assn. of Certified Financial Crime Specialists. “There’s something going on here, and I think it ties back to the de-risking trend.”

But the complaints of those forced to shift money to new banks raise questions: Why don’t banks explain the reason for a closure? Aren’t they required to do so by law?

“Legally, they could say [for example] you bounced too many checks,” said Peter Swire, an expert in law and ethics at Georgia Tech University. “But banks historically have been very cautious about explaining their reasons because banks are understandably worried about frauds, and when they close an account on suspicion of fraud, they don’t want to tip off the fraudster about what they gave them away.”
Swire said it might be a good idea to create a system allowing people who feel unfairly tagged as suspicious to seek redress. He pointed to the Transportation Security Administration’s policy of letting fliers file a challenge if they believe that they have ended up on a no-fly list without cause.

“For individuals on the no-fly list, there’s a procedure now and people get their names cleared and affirm their right to fly,” he said.

In June, a federal judge in Oregon declared the no-fly list, created after the 2001 terrorist attacks, unconstitutional and ordered that the government improve the system for removal from it.

Kindle, the financial crimes expert, said that even if there were a way to challenge a bank’s decision, the decision wouldn’t necessarily change.

Sofian Zakout in Miami said he had barely signed the backs of his new Chase Bank debit and card cards when he received a letter saying the personal and business accounts he had just opened were being closed.

He said he spent two hours answering personal questions by phone to open the accounts — questions that he called even more thorough than the ones he had received in the past from Department of Homeland Security officials. “I was very proud to answer all their questions. No problem. I didn’t take it wrongly,” he said.

But dealing with the bank was a different matter. “To shut me down — this is not good,” Zakout said. “This kind of prejudice is not acceptable.”

One account was for his charity, American Muslims for Emergency and Relief Inc., which has helped victims of Hurricane Katrina and the civil war in Syria, he said.

“Usually nonprofit and charitable organizations are scared to publicize such things,” he said of the closure. “I’m not going to be quiet. I don’t want to see this happening to anyone again.”

In Washington state, Waqas said switching banks left his group unable to spend money for a couple of months because of uncertainty about whether checks would bounce if they were deposited too late. Arranging the transfer and finding a new bank also brought extra work.

He said the organization, the Washington chapter of the Islamic Circle of North America, had a core of about 10 people who hold open houses at mosques and attend community events to introduce people to Islam. They also volunteer at homeless shelters and disburse funds to the indigent.

“Small, local organizations are trying to do some good work, and it looks that someone at the bank found something they didn’t like, and they didn’t have to answer to anyone,” he said of the closure. “Being a good customer, we deserve to at least know if we missed anything so we know we can act accordingly.”

He would like to see a government forum where he could complain without enduring an expensive court battle.

“That this is national phenomenon — it’s kind of worrying, because if next they don’t like some other type of organization, will they shut down them?” he said of the banks. “There’s apparently no checks or ability to stop them.”