Super Cruise: Hands-Free driving is just around the corner 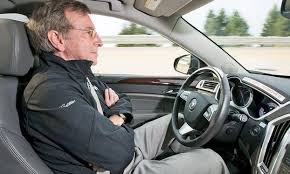 General Motors Co. (GM), the largest U.S. automaker, will introduce a Cadillac model in two years that can be driven on the highway without the driver holding the steering wheel or putting a foot on a pedal.

The 2017 Cadillac model will feature “Super Cruise” technology that takes control of steering, acceleration and braking at highway speeds of 70 miles per hour or in stop-and-go congested traffic, Chief Executive Officer Mary Barra said today in a speech at the Intelligent Transport System World Congress in Detroit. GM declined to release the name of the model that will carry the feature.

Barra also said GM in two years will become the first automaker to equip a model with so-called vehicle-to-vehicle technology that enables the car to communicate with other autos with similar abilities to warn of traffic hazards and improve road safety. GM will make the V2V feature standard on its 2017 Cadillac CTS sedan, debuting in the second half of 2016, she said. The Super Cruise feature will be on a different Cadillac model and goes beyond similar technology available on some Mercedes-Benz models that operates only at low speeds.

“With Super Cruise, when there’s a congestion alert on roads like California’s Santa Monica Freeway, you can let the car take over and drive hands free and feet free through the worst stop-and-go traffic around,” Barra said in the speech at Cobo Center in Detroit. “If the mood strikes you on the high-speed road from Barstow, California, to Las Vegas, you can take a break from the wheel and pedals and let the car do the work. Having it done for you — that’s true luxury.”

The technology will be included in “an all-new Cadillac that’s going to enter a segment where we don’t compete today,” Barra said.

The Super Cruise feature may be greeted with skepticism from consumers, said Michelle Krebs, an analyst with researcher AutoTrader.com in Royal Oak, Michigan.

“There is still a concern by consumers about the safety of their vehicles because there’s been so many recalls,” Krebs said. “This is going to take a while to win the confidence of consumers.”

GM understands it faces the tough task of perfecting the technology before the cars hit the road, Barra said after the speech.

Automakers around the globe are racing to develop self-driving cars to solve the growing problem of global gridlock and help reduce traffic fatalities. There are now more than 1.1 billion vehicles on the road worldwide, Jon Lauckner, GM’s chief technology officer, told reporters in Detroit today. A recent National Highway Traffic Safety Administration study estimated the economic and societal impact of car crashes in the U.S. is more than $870 billion a year, GM said in a statement.

GM’s Super Cruise technology is not a self-driving car and the feature will require drivers to remain alert and ready to take the wheel if traffic conditions become too complex, Lauckner told reporters at a briefing before Barra’s speech.

“We’re rolling out active safety technology today. We’re not going to wait until we have a driverless vehicle that can work in 100 percent of situations,” Lauckner said. “There’s a lot that can be done before we get to the perfect driverless technology.”

Automakers including Hyundai Motor Co. (005380) and Honda Motor Co. (7267)’s Acura luxury line offer such safety features as automatic braking and cruise control that adapts to the speed of cars ahead. GM said in a statement that its “hands-off” system is a “new type of driving experience.”

GM said it’s also joining with Ford Motor Co. (F), the University of Michigan and the Michigan Department of Transportation to create 120 miles of so-called intelligent highways around Detroit. The roads will be equipped with sensors and cameras that enable roads to communicate with cars to alert drivers to hazards and congestion. The technology, to be deployed along stretches of Detroit’s busiest freeways, will monitor vehicle speed and position, though that information will be anonymous and police won’t use it to ticket drivers, Lauckner said.

GM is working with NHTSA, the federal highway safety regulators, to develop vehicle-to-vehicle communication protocols. NHTSA also is the agency that has overseen GM’s record 29 million vehicle recalls this year, including one for faulty ignition switches in small cars that have been linked to at least 13 deaths.

Vehicle-to-vehicle communication enables cars to warn each other of autos hitting the brakes ahead, road hazards, traffic jams and closed roads, GM said. The goal is to make traffic move more smoothly and safely, Barra said.

Barra called on other automakers to put cars on the road that can talk to each other.

“I am asking all of you to accelerate your work in the field as well,” Barra said. “Let’s strive to build cars and trucks that don’t crash. Let’s connect our vehicles.”

Unless another automaker fields a car with V2V technology before GM in two years, the 2017 Cadillac CTS will only be able to communicate with other like models on the road, GM said.

“It’s a chicken-and-egg technology,” John Capp, GM’s director of global safety strategies and vehicle programs, told reporters at the briefing. “If nobody in two years from now puts out a V2V car, then the first CTS off the line will have to wait for the next CTS to talk to.”