Geagea: Islamic State is a cancer that can be removed 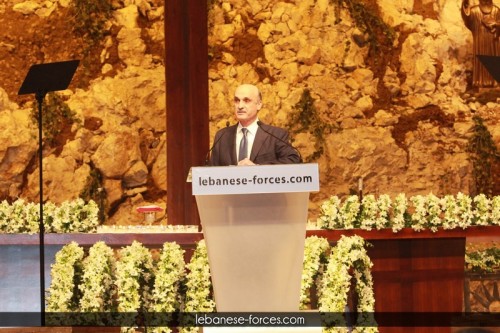 Lebanese Forces leader Samir Geagea  described   on Saturday the Islamic State of Iraq  and Syria  ( ISIS) as a cancer  that should be removed  via an international  and Arab alliance, stressing that the cancer can be halted.

‘ ISIS is a cancerous tumor that surfaced at first in parts of Iraq and Syria and it’s still contained to a certain point and this can be removed only if we join our efforts via an international Arab alliance,’ the LF leader and presidential candidate  said during a ceremony to commemorate the LF martyrs.

‘If they’re trying to intimidate us then do not fear them. … Those who faced major challenges and the likes of ISIS throughout history should not fear those today,’ he said

‘We are the sons of the historical Lebanese resistance.’ He stressed.

Geagea also addressed the presidential election issue describing the continued presidential void as a “flagrant political crime,” rejecting calls for resorting to “autonomous security” under the excuse of confronting the threat posed by the Islamic State terrorists.

“It is a  political crime when some parties seek to ‘behead the republic’ with the aim of becoming its head, and when they take the country hostage in order to get the presidential chair as a ransom,” Geagea said in a possible reference to his political rival FPM leader Michel Aoun  who is reportedly  insisting that he should be the next president or no one else .

“It is a flagrant political crime to vacate the Lebanese republic of its Christian president at a time Mosul and Nineveh’s plain (in Iraq) are being emptied of their Christian residents,” Geagea added

He said the only reason Aoun sought to amend the Constitution was ‘because he failed to reach the presidency.’

Aoun has proposed that  article 49 of the Constitution should  be amended so that the people could directly elect the president instead of the Parliament.

‘Talk of amending the Constitution to bring a strong president is a useless argument because the current mechanism of voting has brought in strong presidents since independence,’ Geagea said.

He said implementing the Lebanese Constitution requires the dissolving of “all illegitimate armed groups” and “returning the military and security conditions exclusively to the Lebanese state, in addition to approving a just and balanced electoral law.”

Turning to the threat posed by the  Islamic State terrorists to Lebanon and the region,  Geagea  rejected calls for Christians and other Lebanese to arm themselves to confront terrorism, stressing that this will force the collapse of the state.

‘While we reject all kinds of self-defense, some try to promote for political purpose under the guise of fighting terrorism,’ he said

‘Christians only carried arms during the Civil War when the state completely collapsed.’ Geagea stressed

He stressed that  the state and its security institutions are  still intact and capable of defending its citizens.

“Should the need arise, or should the IS come, we are ready for resistance, and we will only die on our feet,” he stressed.

“Our martyrs did not fall to allow the presence of foreign gunmen on Lebanon’s soil, nor the presence of Lebanese gunmen who serve foreign interests … President-elect Bashir Gemayel did not die so that someone tries to prevent the election of a president,” added Geagea, a possible reference to Hezbollah which is reportedly  the main obstacle behind the election of a new president to replace Michel Suleiman whose term ended  on May 25

“Our first and only choice is the state and its institutions, army and security forces. We will fight alongside it through stances, words, patience and endurance … but we won’t hesistate for a single moment to confront anyone who tried to transgress against the state through the forces of arms, whether it is called ISIL , ISIS , (IS) or anything else,” he pledged.

Compares IS to the Syrian regime

Turning to the situation in Syria , he compared the Islamic State to the Syrian regime and added

“Is slaughtering an American journalist in the presence of cameras a less terrorist act than blowing up and murdering Rafik Hariri, Bassel Fleihan, Samir Qassir, George Hawi, Gebran Tueni, Pierre Gemayel and other martyrs?” the LF leader went on to saying  on another reference  to Hezbollah and the Syrian regime who were accused of being their murders.