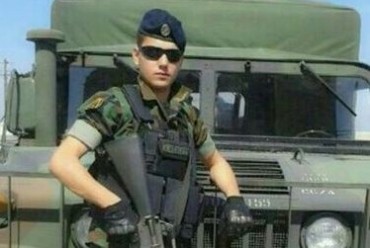 The mother of a Lebanese soldier held captive by the militant Islamic State group said photographs posted online Saturday purporting to show his beheading appeared to be real.

Zeinab Noun said her 20-year-old son, Abbas Medlej, was “sacrificed” after supporters of the militant Sunni group posted images appearing to show a captured Lebanese soldier before and after he was beheaded.

“My son was sacrificed,” said Noun, clutching a passport-sized photo of her son, a handsome, smooth-faced young man.

Medlej’s maternal uncle, Abu Ali Noun, also said the photographs appeared to be of his nephew. A spokesman for Lebanon’s military said it was still investigating the incident.

Medlej would be the second captive Lebanese soldier killed by the Islamic State group, underscoring the grave challenges that face the ill-equipped Lebanese military as it fends off an unprecedented jihadi threat from Syria-based militants.

About two dozen more members of the country’s security forces remain held captive by the militants. They were seized in August when several Syrian rebel factions, including the Islamic State group and al-Qaida linked Nusra Front, overran the Lebanese border town of Arsal, killing and kidnapping soldiers and policemen in the most serious spillover yet of the neighboring civil war.

The Syrian civil war has inflamed sectarian tensions between Lebanon’s Sunnis and Shiites — with Sunnis generally backing the rebel groups and Shiites supporting the government of President Bashar Assad. The Iranian-backed Lebanese Shiite militia Hezbollah has actively fought on the Syrian government side.

Local media had reported that negotiations were underway, with the militants demanding cash and the release of Islamists being held in Lebanese detention. A statement posted by supporters of the Islamic State said Medlej was killed after he tried to escape.

Medlej hailed from a large Shiite clan from the eastern Lebanese city of Baalbak.

“We have to take our revenge from those apostates,” she said.

The captured soldiers and police are from Lebanon’s many religious sects: the first soldier beheaded by the group, Ali Sayid, was a Sunni Muslim. The militants are also holding Christian soldiers and other Sunni Muslims.

Families of the captive soldiers have blocked highways and held demonstrations to pressure the Lebanese government to push harder for the release of the men. There are also fears for the safety of the more than 1 million Syrian refugees who are now in Lebanon as rage grows over the beheadings.

Medlej’s uncle vowed that “every Syrian in Lebanon is a target” after hearing of his nephew’s death.

The Islamic State group has drawn global attention particularly since June, when it swept through northern and western Iraq from its stronghold in neighboring Syria.

They reached Lebanon in August when they overran Arsal, and operate just across the border in the nearby hills of Syria.

On Saturday, Lebanon’s state-run news agency reported heavy fighting in the barren hills between Arsal and the border with Syria. It came hours after militants on a motorbike opened fire on Lebanese soldiers patrolling in a vehicle in the nearby town of Qaa. The soldiers killed one of the attackers, state media reported.

The Islamic State group follows an ultra-conservative, violent interpretation of Islam and is accused by rights groups and the United Nations of committing war crimes, including the mass killings of soldiers, Shiite Muslims and followers of the ancient Yazidi faith in Iraq. It has also beheaded two U.S. freelance journalists who were captured in Syria, Steven Sotloff and James Foley.

A video of Sotloff’s killing was posted on online jihadi networks on Tuesday. On Saturday, the United Nations Security Council issued a press statement condemning his murder.

“This crime is, yet again, a tragic reminder of the increasing dangers journalists face every day in Syria. It also once again demonstrates the brutality of ISIL, which is responsible for thousands of abuses against the Syrian and Iraqi people,” the statement said. ISIL is another name used by the Islamic State group.

Last week, the U.N.’s top human rights body approved a request by Iraq to open an investigation into suspected crimes committed by the Islamic State group against civilians in its country. Its aim would be to provide the Human Rights Council with evidence on atrocities committed in Iraq, which could be used as part of any international war crimes prosecution.