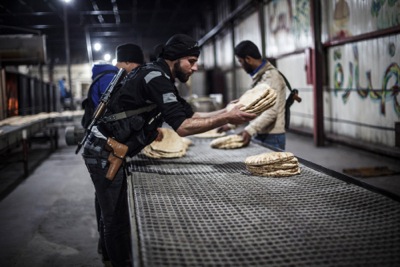 Syrian war planes hit a bakery run by Islamic State in the city of Raqqa, killing at least 17 people, in air raids on Saturday that also hit a major training camp used by the group for a second day running, a group monitoring the war said.

The air strikes on Raqqa, Islamic State’s stronghold some 400 km (250 miles) northeast of Damascus, also hit a building used as an Islamic court, and another of the group’s offices, the Syrian Observatory for Human Rights said.

Quoting activists on the ground, Rami Abdulrahman, founder of the Observatory, said the bakery was run by the militant group. He said those killed included at least eight civilians and an unknown number of Islamic State activists.

Islamic State, which has seized swathes of territory in Iraq and Syria, drove the last Syrian government forces out of Raqqa province in late August when its fighters seized an air base, capturing and later executing scores of Syrian soldiers.

Raqqa is the main Syrian foothold of Islamic State, where

it provides electricity and water, pays salaries, controls traffic, and runs nearly everything from bakeries and banks to schools, courts and mosques.

The Syrian government has said it should be a partner in the fight against Islamic State. But Western states that have backed the uprising against President Bashar al-Assad have dismissed the idea of cooperating with Damascus and describe Assad as part of the problem.