Obama Enlists 9 Allies to Help in the Battle Against ISIS 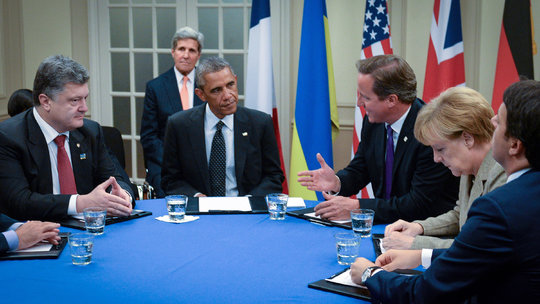 President Obama escalated the American response to the marauding Islamic State in Iraq and Syria on Friday, recruiting at least nine allies to help crush the organization and offering the outlines of a coordinated military strategy that echoes the war on terror developed by his predecessor, George W. Bush, more than a decade ago.

In his most expansive comments to date about how the United States and its friends could defeat ISIS, a once-obscure group of Sunni militants that has now upended the Middle East and overshadowed Al Qaeda, Mr. Obama said the effort would rely on American airstrikes against its leaders and positions, strengthen the moderate Syrian rebel groups to reclaim ground lost to ISIS, and enlist friendly governments in the region to join the fight.While the president’s aides maintained that he has not yet decided to authorize airstrikes in Syria — which he has already done on a limited basis in Iraq — Mr. Obama likened his developing strategy on ISIS to the American effort against Al Qaeda in Pakistan’s tribal regions, which has relied heavily on airstrikes.

Mr. Obama has been under enormous pressure to articulate a way to counter ISIS, which has proclaimed itself an Islamic caliphate that knows no borders and has demonstrated ruthless behavior, including the videotaped beheadings of two Americans. After creating a political tempest by saying last week that his administration lacked a strategy, Mr. Obama sought on Friday to portray himself as spearheading the effort.

But in so doing, the president risks further entangling the American military in exactly the type of costly foreign conflict he has long sought to escape. And his administration has been unable to explain how he can vanquish ISIS without indirectly aiding President Bashar al-Assad of Syria, regarded by the administration as an odious leader who must resign.

Nonetheless, Mr. Obama’s comments, made at the conclusion of a NATO summit meeting here, were in effect a significant expansion of his earlier assessments of the ISIS threat — simply by offering a direct comparison to the strategy against Qaeda militants.

“You initially push them back, you systematically degrade their capabilities, you narrow their scope of action, you slowly shrink the space, the territory that they may control, you take out their leadership,” Mr. Obama said at a news conference here. “And over time, they are not able to conduct the same kinds of terrorist attacks as they once could.”

He said that “we are going to degrade and ultimately defeat ISIL, the same way that we have gone after Al Qaeda,” using an alternate acronym for ISIS. He drew the analogy to Pakistan as an example of how the United States can go to war against militants while limiting the number of American ground combat troops.

Mr. Obama spoke after aides had unveiled what Defense Secretary Chuck Hagel called the “core coalition” to fight the ISIS militants, the outcome of a hastily organized meeting on the sidelines of the NATO summit talks. Diplomats and defense officials from the United States, Britain, France, Australia, Canada, Germany, Turkey, Italy, Poland and Denmark huddled to devise a two-pronged strategy: strengthening allies on the ground in Iraq and Syria, while bombing Sunni militants from the air.

“There is no containment policy for ISIL,” Secretary of State John Kerry said at the start of the meeting. “They’re an ambitious, avowed, genocidal, territorial-grabbing, caliphate-desiring quasi state with an irregular army, and leaving them in some capacity intact anywhere would leave a cancer in place that will ultimately come back to haunt us.”

But he and other officials made clear that at the moment, any ground combat troops would come from either Iraqi security forces and Kurdish pesh merga fighters in Iraq, or the moderate Syrian rebels opposed to President Assad in Syria. “Obviously I think that’s a red line for everybody here: no boots on the ground,” Mr. Kerry said.

For Mr. Obama, assembling a coalition to fight ISIS is particularly important to a president whose initial arrival on the global stage was centered around his opposition to the war in Iraq. He is loath to be viewed as going it alone now that he has been dragged back into a combat role in the same country.

“Getting sucked deeply back into another set of violent conflicts in the Middle East runs against the grain and the very DNA of this administration,” said Brian Katulis, a national security expert with the Center for American Progress, a research organization with close ties to the Obama administration. “But the stunning actions by ISIS this summer has been a wake-up call.”

Even as Mr. Obama is weighing airstrikes in Syria, he and his aides have been questioning what to do afterward, especially since targeting ISIS in Syria will help Mr. Assad.

An administration official said the reasons for assembling a coalition went beyond any political cover that such an alliance might provide with a war-weary American public. For one thing, the official said, certain countries bring expertise, like Britain and Australia in special operations, Jordan in intelligence and Saudi Arabia in financing.

American officials are hoping to expand the coalition to many countries, particularly in the region. Obama administration officials said privately that in addition to the participants at the meeting Friday, the United States was hoping to get quiet intelligence help about the Sunni militants from Jordan. Its leader, King Abdullah II, was attending the Wales summit meeting.

United States officials said they also expected Saudi Arabia to contribute to funding moderate Syrian rebel groups. In addition, Yousef Al Otaiba, the United Arab Emirates ambassador to the United States, said in a statement this week that the Emirates stood ready to join the fight against ISIS. “No one has more at stake than the U.A.E. and other moderate countries in the region that have rejected the regressive Islamist creed and embraced a different, forward-looking path,” the ambassador said.

Enlisting support from Sunni populations in Syria and Iraq is crucial, experts said, because airstrikes alone will not suffice.

Matthew G. Olsen, director of the National Counterterrorism Center in Washington, sought to define more clearly what destroying ISIS would actually mean on the ground.

“From a counterterrorism standpoint, understand that it doesn’t mean eradicating every single person aligned with the group,” Mr. Olsen said. “We need to be realistic about that.”

And like the comprehensive strategy to combat Al Qaeda that has taken years to develop and carry out, Mr. Olsen and other counterterrorism officials said on Friday that destroying the threat from ISIS could take a long time. Even if successful, they said, such a strategy would require maintaining pressure on any remnants of the group.

Administration officials said support for moderate rebels in Syria is critical. This summer, President Obama set aside $500 million to train and support vetted members of the moderate opposition to Mr. Assad. Officials say they expect Congress to approve that request next month.

But even after that money is approved, American officials will face obstacles in strengthening the Free Syrian Army, the moderates of choice for the United States. “This is going to take months,” one Defense Department official said on Friday.