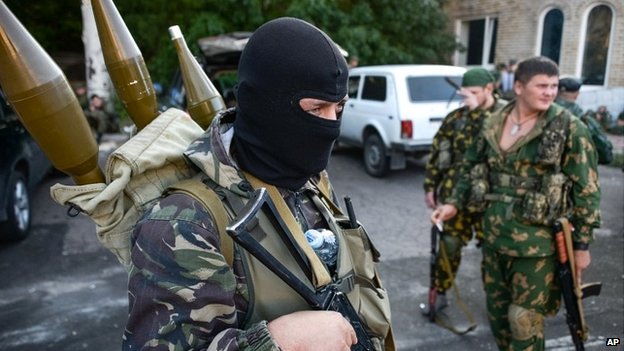 President Vladimir Putin claims the rebels were trying to push government back to protect residents from attack
Share:

Ukraine’s defence minister has accused Russia of launching a “great war” that could claim tens of thousands of lives.

Russia dismissed the comments, saying they only pulled the Ukrainian people further into a bloody civil conflict.

The comments came after Ukrainian troops were forced to flee Luhansk airport in the east of the country amid an offensive by pro-Russian rebels.

Meanwhile, crisis talks between Ukraine officials, rebels and Russian envoys have broken up without agreement.

“A great war has arrived at our doorstep – the likes of which Europe has not seen since World War Two,” Ukrainian Defence Minister Valeriy Heletey wrote on Facebook on Monday.

“Unfortunately, the losses in such a war will be measured not in the hundreds but thousands and tens of thousands,” he added.

Russia has repeatedly denied Ukrainian and Western accusations that it is providing troops and equipment to the rebels.

Russia’s foreign ministry said it was “hard to believe that such statements can be made by the defence minister of a civilised state”.

‘Overt aggression’
Earlier on Monday, Ukraine’s army said it had been forced to withdraw from Luhansk airport after it was attacked by Russian tanks.

Ukrainian President Petro Poroshenko said the incident was “direct, overt aggression against Ukraine from the neighbouring state”.

The retreat came amid a series of gains by pro-Russian rebels in both the Luhansk and Donetsk regions, and further south around the port of Mariupol.

As many as 680 soldiers had been captured by rebels in recent clashes around Donetsk, according to state news agency UNIAN.

A senior Ukrainian official told the AFP news agency that Russia’s goal is to “destabilise [Ukraine] and create a land corridor to Crimea”, the southern peninsula annexed by Russia in March.

The latest round of crisis talks got underway in Belarus on Monday but after several hours of negotiations, they were adjourned until Friday.

“This is just the beginning of the process,” Andrei Purgin, a leader of the Donetsk People’s Republic rebel group, told Russian TV.

Rebel representatives are said to have softened their demand for full independence, telling Russian media they were seeking a “special status” for their regions within Ukraine.

This would leave them in charge of security and give them amnesty from prosecution, while also recognising “deepening economic integration with Russia”, the rebels said.

Correspondents say their demands would mean the de facto division of the country, with the government in Kiev looking to secure closer economic ties with the EU.

Russian Foreign Minister Sergey Lavrov, meanwhile, said he was counting on the talks to focus on “agreeing an immediate and unconditional ceasefire”. 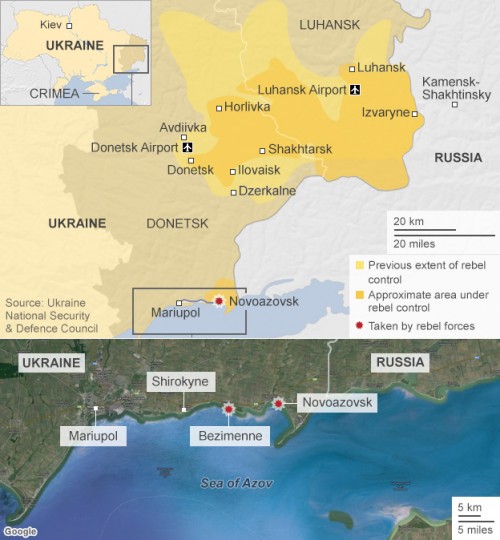 War in eastern Ukraine: The human cost
At least 2,593 people killed since mid-April (not including 298 passengers and crew of Malaysian Airlines MH17, shot down in the area) – UN report on 29 August
951 civilians killed in Donetsk region alone, official regional authorities said on 20 August
In some particularly dangerous places, such as Luhansk region, victims are said to have been buried informally, making accurate counts difficult
Rebels (and some military sources) accuse the government of concealing true numbers
155,800 people have fled elsewhere in Ukraine while at least 188,000 have gone to Russia.