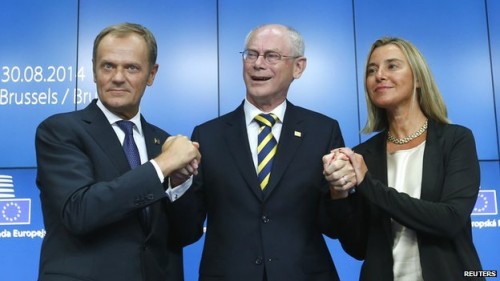 The heads of state and government of the EU reached an agreement on the two top posts yesterday at the start of a special summit in Brussels, which was dominated by the latest escalation of the conflict in Ukraine.

Tusk, who has been Poland’s Prime Minister since 2007, is scheduled to succeed the incumbent Herman Van Rompuy on December 1.

He will in future organise and chair the EU summits and will seek compromises among the member nations.

In spite of his long experience as a head of government, many in the EU found Tusk, 57, unsuitable for the post of the president of the European Council as he spoke very little English.

He was backed by German chancellor Angela Merkel and other conservative leaders in the EU.

Mogherini, 41, who became Italy’s foreign minister only in February, was criticised for her lack of experience.

Mogherini, a social democrat, is expected to take over as the EU high representative for foreign affairs and security policy from Baronness Catherine Ashton when the new European Commission headed by Jean-Claude Juncker assumes office on November 1.

She will also become a vice president of the Commission.

Presenting the two new leaders at a news conference, Rompuy said they have the full endorsement of the European Council.

Tusk will service as the president of the European Council for two and a half years and during that period he will also chair the EU summits.

Describing Tusk as a veteran of the European Council, Rompuy said he has impressed his colleagues and the outside world with the determination and confidence he has led his country and steered it through the economic crisis, managing to maintain steady economic growth and avoiding recession.

The decision to appoint Mogherini as the new high representative for foreign affairs was taken in agreement with President of Juncker, Rompuy said.

EU leaders gave Russia a week to reverse course in Ukraine or face a new round of sanctions.

NATO said that at least 1,000 Russian soldiers are in Ukraine. Russia has amassed some 20,000 troops just across Ukraine’s eastern border, which could rapidly carry out a full-scale invasion. Russia, however, denies all the allegations.