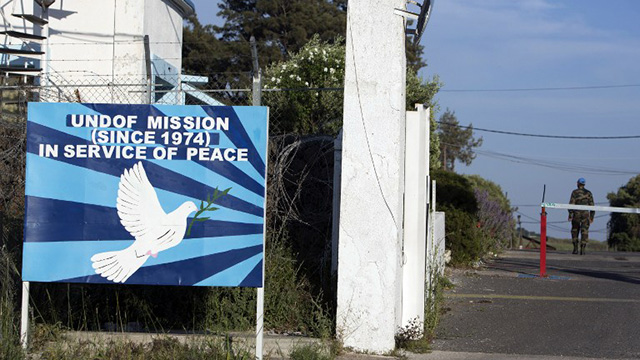 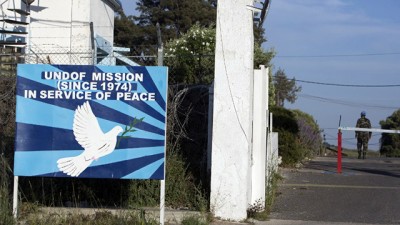 The United Nations demanded Thursday the unconditional and immediate release of 43 detained peacekeepers, who were abducted by “an armed group” in the separation area of occupied Golan Heights between Syria and Israel.

The UN Security Council “strongly condemned the detention of 43 United Nations Disengagement Observer Force (UNDOF) peacekeepers from within the Area of Separation” by “a Security Council- designated terrorist group and by members of non-state armed groups,” it said in a statement.

The peacekeepers, all of them members of a Fijian contingent, were detained in the vicinity of Quneitra earlier Thursday, UN spokesperson Stephane Dujarric said.

Syrian rebels and government forces have engaged in fierce fighting in the area, especially around Quneitra, the largely destroyed and abandoned capital of the Quneitra Governorate in southwestern Syria, to gain the control of the only border crossing between Syria and Israeli-occupied Golan Heights.

The UN said it could not confirm which groups detained the blue helmets. Some groups, self-identified as affiliated to Al-Nursa Front, a branch of Al-Qaeda operating in Syria, claimed responsibility, Dujarric said, adding that “but we are not able to confirm.”

“There are a further 81 troops from the Philippines who are having their movements restricted at Positions 68 and 69 in the vicinity of Ar Ruwayhinah and Burayqah,” he added.

The 15-member UN body called upon all parties to cooperate with UNDOF to enable it to operate freely and to ensure full security of its personnel, stressing that “there should be no military forces in the area of separation other than those of UNDOF.”

The UNDOF on Wednesday said that several mortar rounds struck near its positions as Syrian rebel fighters, including some from Al-Nusra Front, wrestled control of the crossing with the Syrian government troops.

The UNDOF monitors the 1974 disengagement accord between Syria and Israel after the 1973 war. In June, the Security Council extended the mission’s mandate for another six months, until Dec. 31, 2014. As of July 31, 2014, there are 1,223 peacekeepers from six countries serving the UNDOF – Fiji, India, Ireland, Nepal, Netherlands and the Philippines.

In a statement issued here by his spokesperson, UN Secretary- General Ban Ki-moon also strongly condemned the detention, and called for the immediate release of these peacekeepers.

“The Secretary-General also condemns the restriction of movement of UNDOF peacekeepers by armed elements of the opposition in two positions in the vicinity of Ar Ruwayhinah and Burayqah. He calls for the immediate lifting of these restrictions,” said the statement.

Ban also called on all parties to respect UNDOF’s freedom of movement and safety and security.