Google drones can deliver anything including life saving medicine 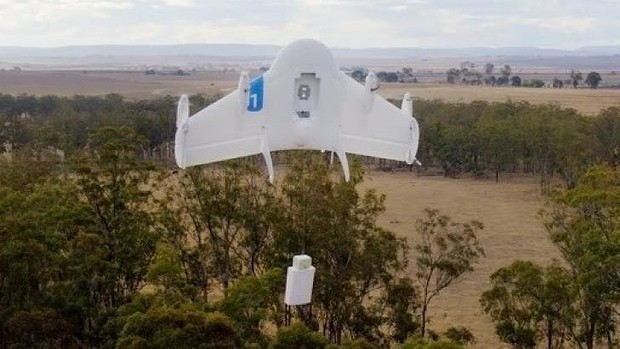 Brisbane- A Queensland farm on the Darling Downs has become the unlikely testing ground of one of the most technologically advanced Google projects that could see autonomous drones deliver anything from chocolate to life-saving medicines.

Google X, a division of the US-based technology company dedicated to making major technological advancements, tested Project Wing near Warwick earlier this month, the first time “non-Googlers” had been involved.

“There’s no reason we should all have a power drill in our garage when, at any one time, the world is using one hundredth of a per cent of its power drills,” he said from the company’s headquarters in California.

“Also, there are situations like emergency response after a flood, or an earthquake, or a tornado, where bringing medicine or other supplies to people who are in need can be very valuable and time can be of the essence.
“We’re looking at the whole spectrum of value that can be delivered using self-flying vehicles.”

The prototype drone used in Queensland was a “tailsitter”, which allowed for vertical take-offs and landings and high speeds during flight – up to about 90km/h.

The first person in the world to receive a delivery from a Google drone was Warwick farmer Neil Parfitt, who took possession of a precious cargo of Cherry Ripes.

“When it all happened, they came down and did a delivery and said ‘Neil, do you realise you’re the first person in the whole world that we’ve delivered something to?’ and I’ve just gone ‘wow!’ ” he said.

“It was amazing at first, because I hadn’t seen it.

“They picked a landing spot in front of the house and it flew around, came above it and it tilts upright and just hovers there.

“They release the parcel down on a cable to the ground and they’ve got pretty good control of it, because the day that we did our first drop-offs and tests, there was a bit of a wind blowing and the aircraft was very stable.

“You’re in awe to start with when you first see it and then you start thinking about where it might be used.”

Mr Parfitt said, beyond the Cherry Ripes, he could see Project Wing being applied to life-saving missions, such as delivering anti-venom quickly in cases of a snake bite.

During the trial, vaccines were delivered for Mr Parfitt’s cows.

“The novelty wasn’t what everybody was responding to – it was the application, the delivery use case, that people seemed to really get,” he said.

Mr Roy said the tailsitter drones, which were vertical during takeoff, landing and while hovering but travelled as speed horizontally like a “flying wing”, had sophisticated sensors to allowed it to fly autonomously.

Power lines, flocking birds and incorrect co-ordinates, for example, would ultimately be detected by the drones and the necessary flight adjustments made.

“It’s one thing to make a vehicle that, when operated by a person, can do a delivery,” Mr Roy said.

“It’s a very different and much harder thing to do – which no-one, including us, has done in a really robust way yet accomplished – is to make that happen autonomously in a very safe way.”

“Going forward, our aspiration is now to build out, start to test and eventually launch a real delivery service using self-flying vehicles,” he said.

“[We’re trying] to build towards a service and to ask along the way many questions about what people would want delivered and about what things they particularly like or are sensitive to in the delivery.”

Mr Swinsburg organised the testing location, between Warwick and Killarney, because he had a friend who owned a 500-acre property in the area.

“It gave us a nice free area to operate away from major towns and where we could set up the site and operate with the airspace we needed,” he said.