Obama on ISIL Syria: “We don’t have a strategy yet ” 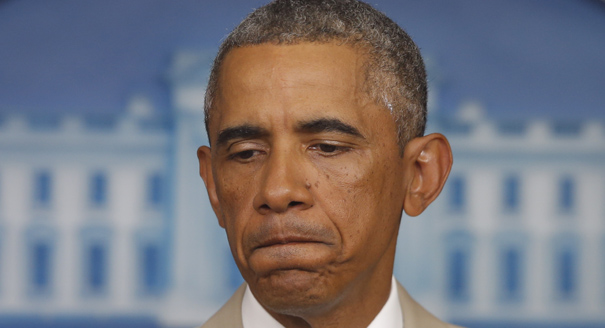 President Barack Obama speaks in the James Brady Press Briefing Room at the White House in Washington, Thursday, Aug. 28, 2014, before convening a meeting with his national security team on the militant threat in Syria and Iraq. (AP Photo/Charles Dharapak)
Share:

President Barack Obama tried to get himself a bit more political space Thursday to make a decision about whether to expand the U.S military campaign against Islamic militants in Iraq and Syria, but in so doing he may have dealt himself a significant political blow by suggesting that his policy on the issue is adrift.

“We don’t have a strategy yet,” Obama said as he took questions from reporters in the White House briefing room.

The president’s aim was clearly to defuse building expectations that U.S. military strikes in Syria were imminent as part of a broadening drive to defeat the Islamic State in Iraq and the Levant. But his awkward choice of words to describe a policymaking process still in midstream seems likely to haunt him for some time.

The inartful phrase quickly went viral among right-leaning media outlets and Republican figures, pushing the White House into damage control mode. White House aides immediately went online and on TV to argue that he was simply pointing out that he had yet to settle on new military options for a broader assault on ISIL that has already led to more than 100 airstrikes on the group’s positions in Iraq.

“In his remarks today, POTUS was explicit – as he has been in the past – about the comprehensive strategy we’ll use to confront ISIL threat,” White House press secretary Josh Earnest wrote on Twitter minutes after Obama left the podium.

Asked about Obama’s “strategy” quote, Earnest told CNN’s Wolf Blitzer that the president was talking specifically about Syria. “He was referring to military options for striking ISIL in Syria. Those options are still being developed by the Pentagon,” Earnest said.

Thursday’s messy press conference capped off a month of difficult public statements from Obama on foreign policy issues. Back on August 7, he made a brief prime-time appearance to announce bombing strikes against ISIL in Iraq, including some aimed at freeing religious minorities besieged on a mountain. It’s not clear in retrospect whether tens of thousands of Yazidi sect members were in fact trapped there or a much smaller number. U.S. official say some didn’t want to leave.

He made five more public statements on ISIL in the ensuing days, including a couple from Martha’s Vineyard, where he was vacationing. The last statement was a harsh condemnation of the Islamic group for its beheading of American journalist James Foley. Obama went directly from that statement to a round of golf, drawing criticism for insensitivity.

The impact and the danger of the no-strategy remark could be exacerbated by earlier Obama comments in which he seemed to dramatically underestimate the ISIL threat.

For weeks, White House aides have been fielding questions about the president’s comments to the New Yorker early this year suggesting that the group was a junior varsity team not as threatening as Al Qaeda. “If a jayvee team puts on Lakers uniforms that doesn’t make them Kobe Bryant,” he told the magazine.

Earnest said this week that Obama wasn’t speaking about ISIL specifically when he made the JV reference, but to the variety of terrorist groups whose ambitions sometimes exceed their reach.

“It was an odd press conference at the very best, but to have a press conference to say we don’t have a strategy was really shocking given the severity of the threat,” House Intelligence Committee Chairman Mike Rogers said on CNN.

Obama’s no-strategy comment Thursday came in response to a question from NBC’s Chuck Todd about whether the president planned to seek congressional approval for any military action in Syria. The president pledged to consult closely with Congress and he went further than his aides to suggest he might seek explicit approval, but he said there was “no point” to get into specifics with lawmakers when he hasn’t settled on whether and how to expand the military campaign.

“I think what I’ve seen in some of the news reports suggests that folks are getting a little further ahead of where we’re at than we currently are. And I think that’s not just my assessment, but the assessment of our military, as well. We need to make sure that we’ve got clear plans, that we’re developing them. At that point, I will consult with Congress and make sure that their voices are heard,” Obama said.

Later in the press conference, the president seemed to deny having an “elaborate strategy” while arguing that he’s already taken steps to deal with the imminent dangers ISIL posed in Iraq.

“I don’t want to put the cart before the horse. And in some of the media reports, the suggestion seems to have been that, you know, we’re about to go full scale on an elaborate strategy for defeating ISIL. And the suggestion, I guess, has been that we’ll start moving forward imminently, and somehow Congress, still out of town, is gonna be left in the dark. That’s not what’s gonna happen,” Obama said.