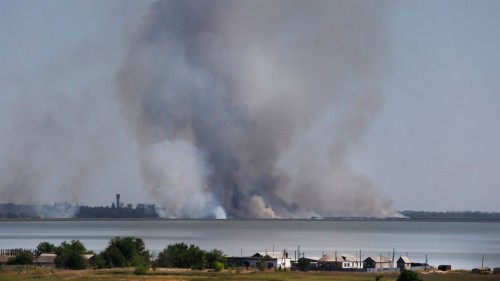 Asserting that Russian soldiers and armaments had crossed into Ukraine to support the separatists, President Petro O. Poroshenko of Ukraine canceled a trip to Turkey on Thursday, and his national security council ordered mandatory conscription for the armed forces.

“Columns of heavy artillery, huge loads of arms and regular Russian servicemen came to the territory of Ukraine from Russia through the uncontrolled border area,” Mr. Poroshenko said at the beginning of an emergency meeting of the Ukrainian Nation Security and Defense Council in Kiev.

Mercenaries, along with regular servicemen, were trying to overrun positions held by the Ukrainian military, he said, according to a statement on his official website.

“The situation is certainly extremely difficult and nobody is going to simplify it,” Mr. Poroshenko said. “Still, it is controlled enough for us to refrain from panic.” Panic could be used as a weapon just like tanks, armored personnel carriers and rifles, he said.

Nonetheless, the deputy head of the council, Mykhailo Koval, announced after the meeting had concluded that mandatory conscription, which was suspended last year, would be restarted this fall, news services reported.

Col. Andriy Lysenko, a spokesman for the national security council, said that the Ukrainian military was planning a counteroffensive against the separatists and what he called “more and more Russians” in the country, but declined to provide details about military plans. He also accused Russia of sending new antiaircraft defense systems into eastern Ukraine.

Separatists aided by Russia held the town of Novoazovsk, he said, with Ukrainian forces having retreated a day earlier. “There was a regrouping of our troops to better protect Mariupol,” Colonel Lysenko said at a briefing in Kiev, saying the aim was to try to prevent the other side from penetrating the key southern city.

But the leader of the main separatist group in southeastern Ukraine said that up to 4,000 Russians, including active-duty soldiers currently on leave, had been fighting against Ukrainian government forces, Russian television reported.

“There are active soldiers fighting among us who preferred to spend their vacation not on the beach, but with us, among their brothers, who are fighting for their freedom,” Aleksandr Zakharchenko, a rebel commander and the prime minister of the self-declared Donetsk People’s Republic, said in an interview on Russian state-run television.

Mr. Zakharchenko said that between 3,000 and 4,000 Russians had fought in the separatist ranks since the conflict erupted in the spring.

That assertion evaded the issue of direct Russian involvement by painting the soldiers as volunteers. It suggests, however, that Moscow still seeks to organize and to some extent control a force that could be operated at arm’s length with a backbone of local participation.

The statement that thousands of Russian soldiers have been involved in Ukraine increased tensions with the United States and the European Union, which have threatened harsher sanctions against Russia as a result of any military incursion. The leaders of both Britain and France were among those warning that the deployment of Russian troops in Ukraine was unacceptable and further measures would be contemplated.

At the same time, Ukraine and its Western allies have not responded to criticism that the Ukrainian tactics against the separatists have included the shelling of civilian areas in rebel strongholds, with the death toll exceeding 2,000, according to the United Nations.

The United Nations Security Council scheduled a special session on Ukraine for Thursday afternoon, and European leaders were planning to discuss the situation at a previously scheduled summit meeting in Brussels on Saturday.

The interview with the separatist leader came against a backdrop of fighting in the strategic southern town of Novoazovsk, which sits along the southern land route from Russia to Crimea, which Russia annexed last March.

Ukraine and its Western allies have accused Moscow of opening a new southern front to relieve pressure on Donetsk and Luhansk farther north, where Ukrainian forces have besieged the separatists. Ukraine’s military said the latest incursion from Russia had involved five armored personnel carriers as well as troops and weapons.

A separatist defeat in the heavily pro-Russian eastern part of Ukraine would deliver a significant domestic political blow to President Vladimir V. Putin and would weaken Moscow’s leverage over Kiev.

But the confrontation in the south raised the specter for the first time in months of a direct confrontation between Ukrainian forces and its giant neighbor.

In eastern Ukraine, fighting intensified in cities and villages along the path of the forces advancing from the Russian border in the multipronged attack. The Ukrainian soldiers in the area southeast of Donetsk are now surrounded, as pro-Russian forces appear to control a road to the west.

The armored columns that captured Novoazovsk and now threaten Mariupol, far from the fighting around Luhansk and Donetsk, serve the separatist aim of diverting Ukrainian forces to deal with that new threat. Western analysts say the advance may also be the start of a ground offensive to seize Ukrainian territory for a land route connecting Russia to Crimea.

Overnight on Wednesday to Thursday, Ukrainian border guards on the other end of that potential land route engaged in a firefight with an armed group that tried to move into mainland Ukraine over the Crimean isthmus, Colonel Lysenko, the Ukrainian military spokesman, said. He characterized the attackers as a Russian “sabotage-intelligence” unit. Off the coast in the Sea of Azov, a Ukrainian Coast Guard ship shot down a Russian drone near Mariupol, he said.

Mr. Zakharchenko, who says he has Ukrainian citizenship, took over as prime minister of the Donetsk People’s Republic this month, replacing Alexandr Borodai, a Russian. Several other Russians who had figured prominently in the rebel ranks, including the military commander Igor Strelkov, have also dropped from sight in recent weeks.

In the interview with the official satellite channel Rossiya 24, Mr. Zakharchenko said that many former professional Russian soldiers had come to Ukraine as volunteers, out of a sense of duty.

“There were about 3,000 or 4,000 of them in our ranks,” Mr. Zakharchenko said. “Many of them have gone home, but the majority have remained here. Unfortunately, some have been killed.”

Interviews this week with captured Russian soldiers in Ukraine, as well as news reports in independent Russian papers about burials of two paratroopers killed in combat, are raising new questions about the extent of Russian military involvement in Ukraine.