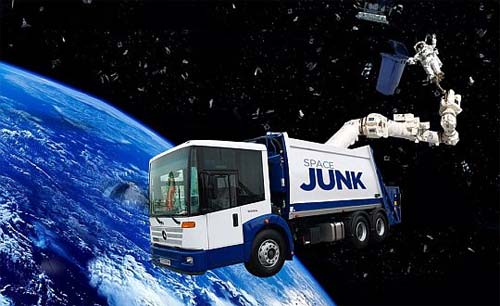 It is a problem that is alarming scientists, satellite operators and the US Air Force: what to do with the millions of pieces of space junk hurtling around the earth at speeds several times faster than a bullet?

On Tuesday the US defence giant Lockheed Martin and an Australian technology company took a step towards solving the conundrum with plans to set up a joint tracking station using optical systems and lasers to monitor the most dangerous objects in orbit.

“Even a tiny piece of space debris can seriously damage satellites worth hundreds of millions of dollars,” said Craig Smith, chief executive of EOS Space Systems.
“Our technology enables us to track the most dangerous pieces of space junk and provide accurate data to satellite operators, which should enable them to avoid collisions.”

EOS is a subsidiary of Electro Optic Systems Holdings, which has agreed a deal with Lockheed to set up a new tracking facility in Western Australia, share expertise and begin selling its tracking services to the space industry.

This follows the award in June of a US$915m contract by the US Air Force to Lockheed to build a “space fence” project – a powerful radar system to track and catalogue space debris. This radar will monitor 200,000 of the largest pieces of junk in orbit.

Awareness of the dangers posed by man-made space debris has grown since the first hypervelocity collision between satellites in 2009, which took place 800km above Siberia. Iridium 33, which was part of a network of satellites providing phone services, was destroyed when it collided with a deactivated Russia satellite Cosmos-2251. US space agency Nasa estimates the collision produced 1,000 pieces of space debris about the size of an apple as well as smaller pieces of junk.

The 2013 Hollywood movie Gravity, which starred Sandra Bullock and George Clooney, focused public attention on the space junk problem, which Nasa has been grappling with for years.

Almost as impressive is the speed at which shares in Electro Optic Systems Holdings have risen: up by 49 per cent over the past seven days, closing Tuesday at 67 cents.

“There is a commercial opportunity when you consider investment in space is worth about US$900m,” says Ba-Ngu Vo, professor at Curtin University.

“And eventually it will become necessary to develop technology to take down some of this junk, perhaps within the next 10-20 years,” he said.