Gaza in ruins, but Palestinians pour into streets to celebrate victory 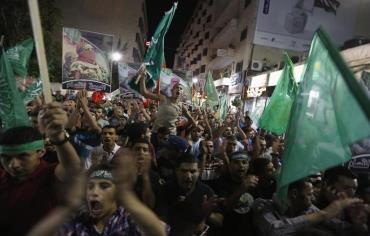 Palestinians in the Gaza Strip poured into the streets Tuesday to celebrate the announcement that Hamas and Israel had agreed to an open-ended cease-fire after 50 days of warfare that has killed more than 2,200 people.

“We have won,” Hamas spokesman Sami Abu Zuhri exulted at a news conference in front of Shifa Hospital. He said the group’s fighters had accomplished “what no Arab army has done. We have defeated them,” referring to Israel.

His exuberance aside, officials from Hamas and another Gaza-based militant group, Islamic Jihad, said the cease-fire agreement essentially brings Israel and Palestinians back to terms agreed on in the truce signed after the 2012 Gaza war.

A senior official in Israeli Prime Minister Benjamin Netanyahu’s office, speaking about the latest cease-fire on the condition of anonymity, said Hamas had gained little, if anything, from the conflict, which has left vast tracts of Gaza in ruins.

“Hamas is now finally accepting a cease-fire proposal that was first proposed by Egypt on July 15,” the official said. “There is nothing more to the proposal than there was a month and a half ago.”

Under the deal, Israel will immediately ease restrictions on Gaza and allow relief aid and construction materials to enter the coastal enclave. The deal will also allow Gaza fishermen to venture six miles offshore; until now, they were restricted to three miles.

Other demands by the Palestinians — building a seaport and an airport, opening all border crossings and improving the movement of goods and people — are set to be discussed in Cairo. Israel also will press its demand that Gaza be demilitarized.

The cease-fire deal was modest. To be dealt with later are the big questions about who will control the Gaza Strip: Hamas, which currently runs the enclave and denies Israel’s right to exist, or the Palestinian Authority, which is committed to nonviolence and has been unsuccessfully seeking to create a sovereign state in the West Bank and Gaza.

U.S. Secretary of State John F. Kerry welcomed the deal and urged the two sides to “fully and completely comply with its terms.”

Kerry also sounded a note of caution, saying in a statement: “We are all aware that this is an opportunity, not a certainty. . . . We are approaching the next phase with our eyes wide open. We have been down this road before, and we are all aware of the challenges ahead.”

The senior Netanyahu aide expressed similar views, saying, “There have been 11 cease-fire attempts that have either been rejected or violated by Hamas, and the key to moving forward and easing the restrictions is honoring cease-fires.”

Fireworks and flags
In Gaza City, residents who an hour earlier were hunkered down in their houses, listening to rocket and missile fire, burst into the streets after the deal was announced.

There were fireworks and chants, and flags of Hamas and Islamic Jihad were waved while banners celebrated the sacrifices of martyrs. Israeli drones continued to fly overhead, as they have for the entire conflict.
During his emotional news conference, Abu Zuhri boasted that the Gaza brigades had shut down Tel Aviv’s international airport and that Hamas rocket fire had forced Israeli residents in the border communities to flee their homes.

“Whatever Netanyahu says, he will not be able to defend his failure,” the Hamas spokesman said.

Meanwhile, even as Hamas leaders started to announce the deal, mortar rounds fired from Gaza killed two Israeli civilians and seriously injured several others on a kibbutz near the border, and Israeli airstrikes claimed eight lives in Gaza.

The conflict has killed about 2,130 Palestinians and 70 Israelis.

Israeli news media reported that the Netanyahu cabinet was split on the decision to accept the cease-fire proposal brokered by Egypt.

The fiercest critic appeared to be the hawkish economy minister, Naftali Bennett, who, according to the news portal Walla, had requested that Netanyahu bring the proposal to a cabinet vote.

Community leaders from Israeli farm towns bordering the Gaza Strip — those hit hardest by rocket fire from the enclave, especially in the past few days — were skeptical about the cease-fire agreement, telling Israeli news channels that only time will tell whether the deal is for real.

“The leaders on both sides will probably each declare victory, while the people on each side do not feel like they are victors at all,” said Miri Eisin, a former army colonel who served as the deputy head of Israel’s combat intelligence corps.

“I am not sure that this is a cease-fire or that it will be respected any better than the previous ones,” said Giora Eiland, former head of Israel’s National Security Council. “We will need to wait two or three days to see if this is stable enough. All previous declarations were not very reliable.”

Israeli hard-liners are complaining that the deal did little to guarantee that Hamas would not quickly rearm and begin firing rockets and mortar rounds again.

“The decision to accept the latest cease-fire with Hamas is completely without justification,” said Danny Danon, a member of parliament and leader of Netanyahu’s Likud party.

“After thousands of rockets fired at our cities, and scores of Israelis killed and wounded, we are agreeing to accept the very situation that allowed Hamas to arm itself and prepare its forces for their murderous attacks on Israel,” Danon said.

Mahmoud Abbas, the leader of the Palestinian Authority, made the cease-fire announcement in front of the executive committee of the Palestine Liberation Organization in the West Bank city of Ramallah.

“We accept the cease-fire,” Abbas said. “It will provide food and construction materials for Gaza,” which he described as being in a “disastrous situation, almost unimaginable.”

“Later we will have more talks,” he said.