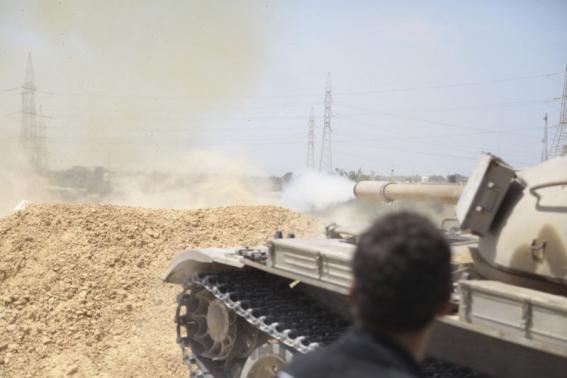 A tank belonging to the Western Shield, a branch of the Libya Shield forces, fires during a clash with rival militias around the former Libyan army camp, Camp 27, in the 27 district, west of Tripoli, August 22, 2014. REUTERS/Stringer
Share:

Forces from the Libyan city of Misrata on Saturday seized Tripoli’s main airport after more than a month of fighting with a rival group, a Misrata spokesman said.

Pictures on social media purportedly showed Misrata fighters celebrating at the terminal building in what, if confirmed, would be a big development in the battle to control the capital.

War planes had earlier struck Misrata positions in Tripoli in an attack claimed by renegade general Khalifa Haftar. The raids had killed 10 people and wounded dozens, the Misrata faction said.

The fighting is the worst since the overthrow of Muammar Gaddafi in 2011..

In the NATO-backed campaign to oust Gaddafi, fighters from the western region of Zintan and Misrata, east of Tripoli, were comrades-in-arms. But they later fell out and this year have turned parts of Tripoli into a battlefield.

Haftar launched a campaign against Islamists in the eastern city of Benghazi in May and threw his weight behind the Zintan fighters.

On Saturday’s fighting, residents heard explosions early in the morning near the airport, where the two groups have been fighting for control for more than a month.

Local television channel al-Nabaa said planes had attacked four Misrata positions. A Misrata spokesman said the planes had come from Egypt and the United Arab Emirates, two countries which have cracked down on Islamists.

But Haftar’s air defence commander, Sager al-Jouroushi, told Reuters that his forces were responsible for the attack. Haftar’s forces also claimed responsibility for air raids on Misrata positions in Tripoli on Monday.

Western countries and Egypt, worried about Libya becoming a failed state and safe haven for Islamist militants, have denied any involvement. The Libyan ngovernment has said it does not know who is responsible for the air attacks.

Prime Minister Abdullah al-Thani called on Egypt and Tunisia to open their airspace again for flights to western Libya. Both countries had cancelled most flights to Libya for security reasons after the air strikes, cutting off a vital link to the outside for Libyans and foreigners fleeing fighting.

Libya has used the small Matiga airport in Tripoli for civilian traffic since the main airport was turned into a battlefield last month. The tower, runway and at least 20 aircraft have been damaged, officials have said.

When flying into Matiga, passengers can sometimes see smoke rising from battles in and around the main airport.

The violence has prompted the United Nations and foreign embassies in Libya to evacuate their staff and citizens, and foreign airlines largely stopped flying to Libya.

Tripoli has largely slipped out of control of the government, with senior officials working from Tobruk in the east, where the new parliament has based itself to escape the violence in Tripoli and Benghazi.

Libya’s central government lacks a functioning national army and relies on militia for public security. But while these get state salaries and wear uniforms, they report in practice to their own commanders and towns.