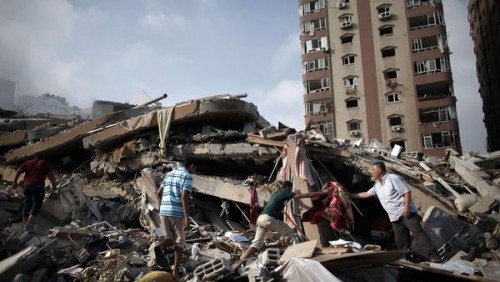 Palestinians collect items from the rubble of a 12-story apartment building that collapsed Saturday after it was hit in an Israeli airstrike in the heart of Gaza City. (Thomas Coex / AFP/Getty Images)
Share:
For the second time in two days, Israeli airstrikes in the Gaza Strip on Sunday reduced a tall building to rubble, signaling a change of tactics under which any structure used by Hamas can be put on Israel’s target list.

Sunday’s early-morning strikes hit a seven-story office building in the southern town of Rafah, leveling it and badly damaging an adjacent shopping mall. A day earlier, a 12-story apartment tower in Gaza City was destroyed, showering the area with smashed masonry.

The nearly seven-week old conflict has escalated sharply in recent days, with Palestinian militants firing more than 100 rockets and mortars since Saturday and Israel stepping up its airstrikes across the coastal territory. The building in Rafah that was hit Sunday contained an office of the Hamas-run Interior Ministry, the Associated Press reported.

Since the start of fighting on July 8, nearly 2,100 people have been killed in Gaza, most of them civilians, and 68 people have been killed on the Israeli side, all but four of them soldiers. The latest victim, a 4-year-old boy killed Friday by a mortar strike in a farm community near the boundary with Gaza, was to be buried Sunday, and Israeli newspapers were filled with outraged commentary about the government’s failure to protect citizens living close to the seaside strip.

Israel has a sophisticated antimissile system, Iron Dome, to protect against rocket fire, and sirens warn of approaching rockets. But there is no comparable protection against short-range mortars that menace communities lying closest to Gaza.

Diplomatic efforts were continuing in a bid to attain a cease-fire and restart indirect talks. Israel has said it will not negotiate while rocket fire continues; Egypt, which has mediated previous talks, urged both sides to observe a truce.