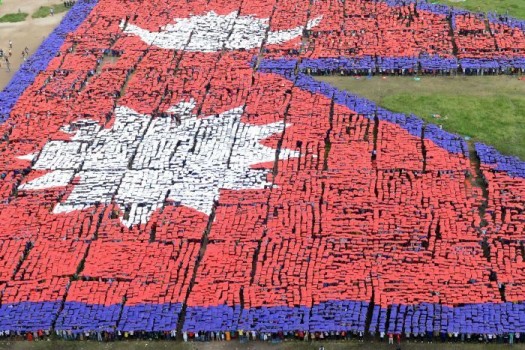 An aerial view as 35,000 people gather at the Tudikhel open ground in Kathmandu to try to break a world record. (AFP: Prakash Mathema)
Share:
More than 35,000 Nepalese attempted to set a new international record as they joined together to form the world’s largest ‘human national flag’.

The country’s anthem played as participants held up crimson, blue and white coloured cardboard for 10 minutes on an open ground in Kathmandu’s city centre to form a representation of Nepal’s national flag.

Nepal’s flag is the only one in the world that is not a quadrilateral – instead, it is made up of two triangles.

“We conceived this idea to spread the message that all our countrymen are united under one flag,” said Bhawesh Khanal, president of Human Values for Peace and Prosperity, the group that spearheaded the event.

Nepal is in the process of drafting a new constitution, a key step in a stalled peace process that began in 2006 at the end of a ten-year civil war in 2006.

Leaders have promised an inclusive constitution and federalism, ending gender and caste-based discrimination.

Organisers gave numbered tickets to participants to keep a count of how many took part in the event.

“Our vision came true – thousands of people came together to form our country’s flag and claim a new world record,” Mr Khanal said.

He said the group will now submit its claim with photographic and video evidence for a new record to the headquarters of Guinness World Records in London.

They expect a ruling on their submission within two months.

Among the participants was 15-year-old student Anita Gautam.

“It was an amazing experience – there is a patriotic vibe here, a sense that we have to work together to build our country,” she said.

Anil Shah, a prominent banker, was one of three official witnesses at the event.

“Watching it brought tears to my eyes. I felt proud to be a Nepali. I believe we’ve set a new record,” he said.