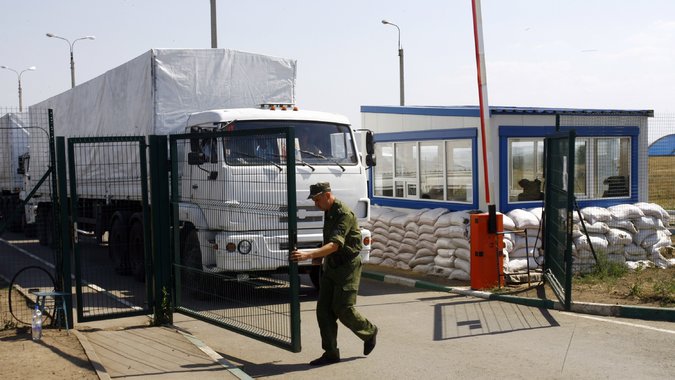 A Russian convoy crossed the Ukrainian border at a checkpoint in Izvaryne, Ukraine, on Friday. Credit Sergey Venyavsky/Agence France-Presse — Getty Images
Share:
Ukraine declared on Friday that Russia had launched a “direct invasion” of its territory after Moscow sent a convoy of trucks across the border into eastern Ukraine where pro-Russian rebels are fighting government forces.

NATO called it a blatant breach of Russia’s international commitments and said Russia had been using artillery against Ukrainian troops both across the border and within Ukraine, the closest the alliance has come to accusing Russia of direct war.

“These developments are even more worrying as they coincide with a major escalation in Russian military involvement in eastern Ukraine since mid-August, including the use of Russian forces,” NATO Secretary-General Anders Fogh Rasmussen said.

Moscow, which has thousands of troops close to the Russian side of the border, warned against any attempt to “disrupt” what it said was a purely humanitarian operation; it did not say what action it might take if Kiev’s military intervened.

Ukrainian President Petro Poroshenko described the entry of the trucks without Kiev’s permission as a “flagrant violation of international law.” But a senior security chief said Ukrainian forces would let them pass to avoid “provocations”.

The Pentagon said the United States was very concerned about the development which was in violation of Ukraine’s territorial integrity and it called on Moscow to withdraw its equipment and personnel immediately or face extra “costs”.

The United States and European Union have already imposed economic sanctions on Moscow and the Kremlin has retaliated; NATO has deployed extra troops in member states bordering Russia, including the Baltic states and Poland.

Kiev called on international allies to unite in “a decisive condemnation of illegal and aggressive actions” by Russia.

Rasmussen said Russia risked further international isolation, although Europe has been reluctant to step up sanctions due to trade ties and its use of Russian gas.

Repeating earlier suspicions by Kiev that the aid cargo could be somehow used to support the separatists, the foreign ministry said: “Neither the Ukrainian side nor the International Committee of the Red Cross knows the content of the trucks. This arouses special concern.”

The fact that Russian vehicles had crossed into Ukraine without permission “testifies to the deliberate and aggressive character of actions by the Russian side,” the ministry said.

A Reuters witness said the white-painted trucks had crossed onto Ukrainian soil and headed towards the rebel stronghold of Luhansk escorted by a small number of separatist fighters.

The presence of the Russian trucks could force Ukrainian troops encircling Luhansk to rein in their offensive against the rebels there, because if they hit one of the Russian vehicles, that could give Moscow justification for a full-scale invasion.

Any lull in fighting that resulted would give a badly-needed respite to the rebels in Luhansk, who have been facing defeat, and allow them to regroup.

The news that the convoy had finally crossed into Ukraine dominated Russian TV news channels and was certain to have further boosted Putin’s standing at home.

But it equally cast a shadow over a meeting next Tuesday with Poroshenko and the European Union in the Belarussian capital of Minsk which has held out prospects of a breakthrough to end the confrontation.

Mikhail Denikin, chairman of the village council in Izvaryne, on the Ukrainian side of the border, stood by the road waving a large Russian flag as the trucks drove past.

“Big thanks to Russia. Our brothers did not forget us. We are brothers. That is the most important thing. We are Slavs, we are together,” Denikin told Reuters Television.

Coverage of the crossing blanketed Russian television channels, with pictures of elderly people cheering its passage highlighting its political value to Putin in Russia.

A traffic police officer on the Russian side of the border, who had been escorting the aid convoy within Russian territory, said the entire convoy of about 260 trucks had crossed over into Ukraine. He said it was possible they would cross back into Russia on Friday evening after delivering their cargo.

“We consider this a direct invasion by Russia of Ukraine,” Ukrainian state security chief Valentyn Nalivaychenko said in a statement to journalists.

Asked whether Ukraine would use air strikes against the convoy, Nalivaychenko said: “Against them, no.”

But Ukrainian authorities said the convoy would pass through an area where the rebels were firing so its security could not be guaranteed. Interfax news agency said later that the first trucks had reached the rebel-held city of Luhansk.

The largely Russian-speaking Donetsk and Luhansk regions both declared independence after a plebiscite deemed illegal by Kiev. The regions have seen intense fighting in recent weeks as rebels have been driven back into pockets.

Moscow, which denies accusations it has given military support to the rebellion, had earlier expressed impatience with delays with the convoy which left Moscow region around Aug. 13.

“We warn against any attempts to disrupt this purely humanitarian mission,” the Russian foreign ministry said. “Responsibility for any possible consequences of provocations … will lie, completely and entirely, with those who are prepared to further sacrifice human lives for the sake of their ambitions and geo-political ploys.”

The International Committee for the Red Cross, which both Moscow and Kiev had agreed should supervise the convoy, said it was not escorting it “due to the volatile security situation”.

The entry of the trucks ran counter to the arrangement agreed with the ICRC, Sebastien Brabant, spokesman for the European Union’s foreign policy chief Catherine Ashton, said.

“This is a clear violation of the Ukrainian border,” he said. We urge Russia to reverse its decision.”

Kiev has been using troops, artillery and air power in an attempt to quell a separatist rebellion that broke out soon after Russia annexed the Crimean peninsula from Ukraine in March. The last few weeks has seen a string of rebel defeats in a conflict that has killed over 2,000 people.

A Reuters cameraman said it had been possible to see inside some of the vehicles on Friday. The cargoes visible consisted of cardboard boxes with tinned food, pallets of bottled water, generators and other supplies.

Poroshenko said on Thursday he would call on Putin to rein in pro-Russian separatists when the two men meet next week and told the Kremlin chief he had “a strong country, a strong army”.

The Ukrainian and Russian presidential chiefs of staff spoke by telephone on Friday and agreed on the need for the swift completion of the aid delivery operation, Kremlin spokesman Dmitry Peskov said. It was not clear whether the conversation took place before the trucks crossed the border.

Merkel is scheduled to visit Kiev on Saturday to show her support for Poroshenko – but diplomats say she is also bearing a message that he should consider calling a ceasefire so as not to incur a backlash from Putin.

In Donetsk, pro-Russia separatist Denis Pushilin, guarded by men who identified themselves as Chechens, handed out aid –-sugar, tea, canned beef and rice –- and envelopes of money to three families in a state building in the city center. The aid, collected in Russia by Russian citizens, he said was not connected to the aid crossing the border on Friday.

“Hopefully soon we’ll be able to start handing out aid to hundreds if not thousands of more families in need,” he said.

Rebels brought two destroyed Ukrainian armored personnel carriers to Donetsk’s central Lenin Square to display on Sunday, when rebels plan on parading prisoners of war through the streets of the city as a counterpoint to festivities planned in Kiev as part of Ukraine’s Independence Day.

After four months of fighting in the industrial, Russian-speaking eastern Ukraine, the area faces a humanitarian crisis, lacking supplies of food, medicine and clean water.
Reuters