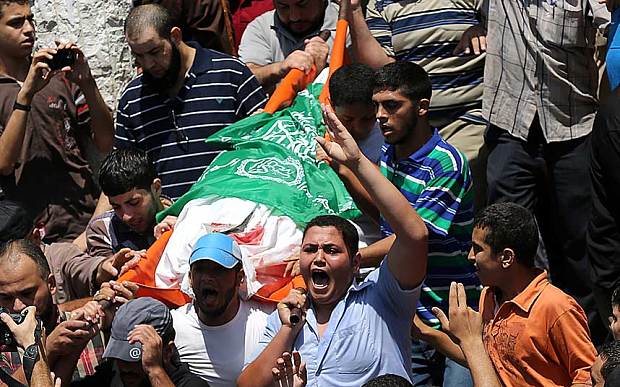 Hamas has denied that the head of its military wing was killed in an Israeli air strike, as it warned international airliners against flying into Tel Aviv amid a re-escalation of the Gaza conflict.

Israel launched a targeted attack on a house in Gaza where Mohammed Deif, the leader of the al-Qassam Brigades, was thought to have been staying with his family on Tuesday evening.

While thousands of mourners took to the streets of Gaza on Wednesday for the funeral of Mr Deif’s wife and seven-month-old child, Hamas officials insisted Mr Deif had not been killed.

“You have failed and you have missed”, said a Hamas spokesperson in an official statement.

But question marks remained over an as yet unidentified dead body of a male in his 50s which was found in the rubble of the bombed house.

On Wednesday, a Hamas spokesman is said to have referred to Mr Deif as “shaheed”, a term in Arabic to denote a martyr, on at least one occasion during interviews, fuelling suspicions.

On the same day, Fox News quoted an Israeli intelligence source who said that it was believed that Mr Deif had been killed in the attack.

The speculation comes alongside a resumption of bloody violence between Israel and Hamas.

In Gaza, at least 20 people were killed following Israeli air strikes on Wednesday, raising the total death toll to over 2,030 people killed since the beginning of the air strikes on 8th July.

Thousands more have been injured and rendered homeless. Many Gazans continued to flee their towns and villages to seek shelter in UN facilities throughout the Strip.

In Israel, residents in the south of the country scrambled for cover as rocket fire increased.

Since the ceasefire was breached on Tuesday afternoon, over 180 rockets have been launched from the coastal enclave towards Israel, of which 34 were intercepted by the Iron Dome anti-missile system.

Hamas on Wednesday appeared to warn that it would target Tel Aviv’s Ben Gurion airport.

“We are warning international airlines and press them to stop flying into Ben Gurion airport from 6.00am Thursday,” said an al-Qassam Brigades spokesman.

Hamas also claimed it had fired two rockets aimed at Israeli gas fields 19 miles off the coast of Gaza, in what would be the first such attack. Israel said that no rockets had struck any gas platforms.

The ceasefire talks which had been progressing for almost six days were declared as over by both sides on Wednesday, and Israeli and Palestinian negotiators have left Cairo.

In Gaza, the targeting of Mohammad Deif signifies a return to Israel’s strategy of tactical assassinations of enemy leaders. In 2012, the previous Gaza war entitled ‘Operation Pillar of Defence’ was launched after Israel targeted and killed Hamas leader Ahmed al-Jabari.

While the assassination attempt was applauded by many cabinet ministers, some commentators expressed doubts as to what such actions aimed to achieve.

“There is no certainty that without Deif it will be better than it is with him, in the internal power relations in Hamas’s leadership and in the policy it sets in relation to Israel”, noted senior Haaretz correspondent Amir Oren.

Mr Deif’s house in Khan Younis was bombed by the IDF almost four weeks ago, but Israeli military chiefs said at the time the attack was meant as a warning message to Mr Deif, who is believed to have spent most of the war in deep underground tunnels in Gaza.

This is at least the fourth time in two decades that an attempt on Mohammad Deif’s life has been made by Israel, who considered him a prime target due to previous terror activity.

Prior to becoming the head of Hamas’s military wing, Mr Deif was involved in the kidnapping and killing of Israeli soldiers and masterminded at least two suicide bomb attacks on public buses in Jerusalem.

In 2002, an Israeli helicopter fired a missile directly on Mr Deif’s car, leaving him seriously injured, including the loss of one eye.

The following year Israelis launched a bomb on a house where the entire Hamas leadership was holding a meeting. The bomb only destroyed the top floor of the building, leaving the leadership to escape from a lower floor.

In 2006, an IDF attack destroyed the entire house at which Mr Deif was located with other Hamas figures, reportedly leaving him paralysed, despite undergoing four hours of spinal surgery.