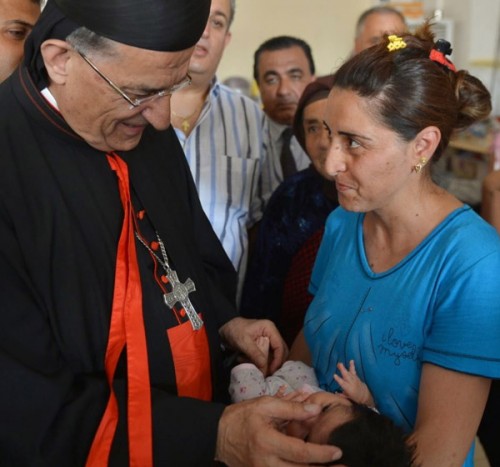 Lebanese Cardinal Bechara Rai, the patriarch of Maronite Catholics who headed a delegation of Catholic and Orthodox patriarchs to Iraq Aug. 20, blesses a baby in Irbil. (CNS/Courtesy Maronite Patriarchate)
Share:

By Doreen Abi Raad, CNS
BEIRUT , Lebanon  — A delegation of Catholic and Orthodox patriarchs visited Irbil, Iraq, to show their support and solidarity with the more than 100,000 Christians and minorities displaced in the country by the advance of Islamist militants.Lebanese Cardinal Bechara Rai, patriarch of the Maronite Catholics, said the Aug. 20 trip was “a first step in the implementation of the statement issued by the patriarchs,” referring to a special summit Aug. 7 to address the crisis facing Christians in Iraq and Syria.

“The first and essential clause in the statement is our support for Christians who have left their houses because of the Islamic State and other terrorist organizations,” Cardinal Rai said.

Cardinal Rai left Beirut with Melkite Catholic Patriarch Gregoire III Laham, Syriac Catholic Patriarch Ignace Joseph III Younan and Syriac Orthodox Patriarch Ignatius Aphrem II.Upon their arrival in Irbil, the capital of the Kurdish region of Iraq, the prelates were joined by Chaldean Catholic Patriarch Louis Sako of Baghdad and local officials, including Kurdistan’s Regional Interior Minister Karim Sinjari and Irbil Governor Nawzad Hadi.The patriarchs visited refugees and prayed with them at three churches in Irbil hosting refugees from the Ninevah Plain. The refugees fled after being told by the Islamic State militants to convert to Islam, pay the Islamic jizya tax, or be killed. Many were robbed of their possessions before being forced to flee.“We want all the Christians, Muslims, Yezidis, Sunnis, Shiites and Kurds to stay in Iraq and not to leave because this is our homeland, this is our culture, and civilization and we do not want to part with it,” Cardinal Rai told reporters. “The ones who want to help us must work to stop injustice, help us end injustice and help our people regain their rights. This is what we want from the ones who want to help.”Later, he told them: “We cannot stand idly by and watch as evil oppresses the people. We will carry our cause to the whole world.”Lebanon’s National News Agency reported that the delegation received a promise from the Kurdish authorities that Christians will be protected “until the last drop of blood.” The patriarchs stressed that their priority is for the safe return of all refugees and for Christians and minorities to be able to remain in their homeland.“We demand that the displaced be allowed to return to their land with dignity. We will not accept anything less than that,” Cardinal Rai said.In a news conference before leaving Iraq, the patriarchs expressed support for human rights, including the right of Christians to remain in their homes.“We cannot tolerate the tragedy we have witnessed here today,” said Orthodox Patriarch Ignatius. He urged U.N. Secretary-General Ban Ki-moon to visit the regions to determine if the displaced Iraqis could continue to live this way.Cardinal Rai said: “It is unacceptable to allow terrorist organizations to eliminate entire communities in the 21st century.”“Do not think of emigrating; safeguard your roots,” the cardinal told Christians. “We are on your side and we will raise our voice to the international community to act against terrorism.”
He called for “the international community to mobilize” to thwart the threat of the Islamic State and other terrorist groups.”Patriarch Sako said militias were not the solution.“Self-defense is a holy right, but forming militias will ruin Iraq,” Patriarch Sako said. “State security forces should defend the people.”Pope Francis has expressed concern about the Iraqi minorities and sent a special envoy, Cardinal Fernando Filoni, who skipped the papal visit to South Korea and arrived in Iraq Aug. 13. During an Aug. 18 news conference aboard the papal plane, Pope Francis said his recent appeal to the U.N. to “take action to end the humanitarian tragedy now underway in Iraq” was one of a series of measures he had considered with Vatican officials, including his decision to send Cardinal Filoni to meet with the region’s church and government officials and refugees.The same day, Cardinal Filoni and Patriarch Sako appealed to the international community to help to liberate villages controlled by the Islamic State terrorists and to provide the displaced with international protection. Vatican Radio also reported that Cardinal Filoni met in Baghdad Aug. 19 with Iraqi President Fouad Massoum and delivered a personal letter from Pope Francis. Vatican Radio reported the president said he would respond.Cardinal Filoni was expected to arrive back in Rome Aug. 21.