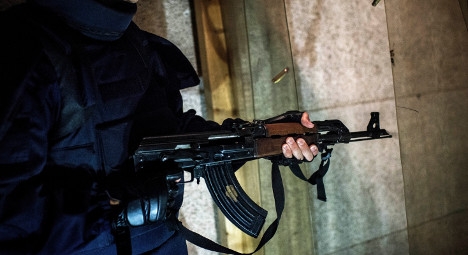 A gang armed with Kalashnikovs targeted the motorcade of a Saudi Arabian prince in Paris on Sunday night. Photo: Jeff Pachoud/AFP
Share:
Armed robbers attacked a Saudi Arabian prince’s convoy in Paris on Sunday night, police said on Monday, taking what the victims told police was around 250,000 euros ($335,000) in cash and some sensitive documents.

The convoy had been heading for Le Bourget airport north of the city. Witnesses told police a group of heavily armed men attacked the last car in the convoy near Porte de la Chapelle at around 2100 (1500 EST) and drove off in it.

The Mercedes car attacked was a supply vehicle that was later found burned along with the cars used by the attackers, sources said

No suspects have yet been apprehended.

The Saudi prince was not identified and the Saudi embassy has not commented on the robbery.

No shots were fired and nobody was hurt, a police source told Reuters, adding that the robbers were still at large and an investigation was under way.

Rocco Contento, a representative of police union SGP, told BFMTV the attackers appeared to be “people who knew the itinerary” of the cars.