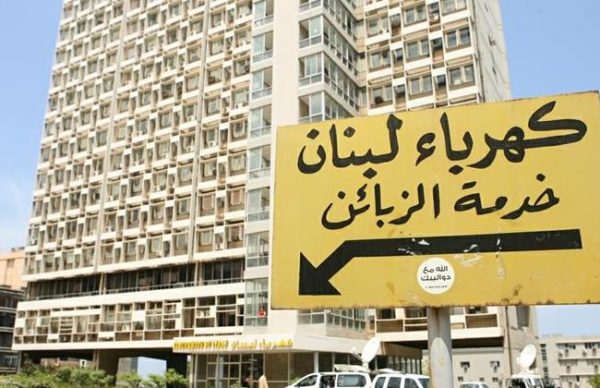 EDL headquarters in Beirut Lebanon. The sign reads Electricité du Liban – customer service . The state-owned electricity company is considered one of the biggest drains on the state budget, costing about $2 billion a year, depending on international oil prices. Tariffs have not gone up since 1996, even though many Lebanese say they would happily pay more if they could get 24-hour power instead of relying on costly neighborhood generators.
Share:

Electricite du Liban (EDL) contract daily workers blocked roads across Lebanon after Internal Security Forces (ISF) arrested four of their colleagues during a protest that ended up in violence in the southern city of Tyre.

National News Agency reported that the arrests took place when protesting workers clashed with the security personnel who tried to open the company’s doors, which were closed by the workers .

It added that the protesters at the company’s headquarters in Beirut gave security forces a one-hour deadline to release their colleagues.

The contract daily workers started an open-ended strike last Wednesday after accusing the state-run firm of not abiding by the law following a decision for the employment of only 897 out of the 2,000 workers.

The workers erected tents at the company’s HQ and several of its branches, and closed its doors to stop any employee from going inside.

But al-Hayek said on Thursday that EDL was not a “barn” and denied that the law allowed all contract workers to become full-time employees.

According to analysts EDL is a huge burden for Lebanon because its is heavily subsidized . Many of the contract employees do not show up at work , they go there just to clock in and leave to work elsewhere or do nothing . The only problem is that those that don’t  show up  are backed by influential politicians such as Speaker Nabih Berri (who is in turn backed by Hezbollah   ) and cannot be fired even though they are contract hourly workers .

In Lebanon power blackouts are a daily affair . It is normal to have anywhere between 12 -16 hour daily blackouts in Lebanon, even in the tourist resorts of Mt Lebanon.