The myth and reality of sectarianism in Iraq 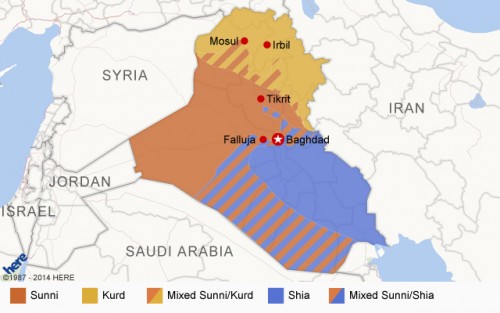 by Musa al-Gharbi
On Aug. 14, embattled Iraqi Prime Minister Nouri al-Maliki stepped down and accepted the candidacy of his successor, Haider al-Abadi, who was nominated last week by the Iraqi president in an effort to end months of political stalemate in Baghdad. Maliki’s ouster has been a key demand of the Sunni opposition and United States. His resignation was welcomed, remarkably, by both Saudi Arabia and Iran. In fact, the end of Maliki’s reign was heightened by a coup from within his Shia alliance that had been brewing for some time. However, his removal alone — more symbolic than substantial — will not resolve the deeper political crisis that threatens Iraq’s unity and long-term viability.

This threat is often framed in terms of sectarian tensions among Iraq’s Shias, Sunnis and Kurds. But sectarianism in Iraq is also easy to misunderstand or overstate. The current turmoil results not from the centuries-old feud between Sunnis and Shias but from a revolt against very specific governmental policies — most of which have their origins in the U.S. invasion and occupation.

While Iraq certainly had ethnic tensions prior to the 2003 U.S. invasion, Saddam Hussein’s regime did not allow overt sectarianism to flourish. As a result, Sunnis and Shias led a fairly well-integrated existence in Iraq, especially in the larger cities. For example, nearly a third of marriages were between members of different sects. Iraq also had thriving populations of Christians and other ethnic and religious minorities.

Saddam co-opted Islamic discourse when it suited him politically, beginning in the 1980s (to maintain legitimacy in the wake of the Iranian revolution) and particularly toward the end of his reign in response to a potential U.S. invasion. But throughout, he was ruthless against all Islamist organizations, regardless of whether their movements were peaceful or violent, Sunni or Shia.

Political affiliation in Iraq was largely based on secular ideologies. In fact, it was considered taboo to inquire about or divulge one’s religious persuasion. Saddam’s Sunni-dominated regime boasted a significant Shia presence even in the upper echelons of power. He ensured that no one group or person grew too strong. His security forces would indiscriminately purge anyone perceived as a threat. Whenever possible, he also attempted to co-opt leaders of socioeconomic minority groups, striking deals with them to keep a lid on indigenous resistance.

Even during the early stages of the U.S. occupation, the insurgency was fairly broad-based, with Sunni and Shia militias united around driving out the occupiers. To undermine this trend, Paul Bremer, the U.S.-appointed head of the Provisional Authority of Iraq, deployed a divide-and-rule strategy in negotiating the new Iraqi state. The consequences of his colonial-era stratagem continue to reverberate throughout Iraq and the region.

In Bremer’s Iraq, citizens were forced to declare a sect on all state-issued documents. Sectarian identity formed the basis of political organization: Each sect was allocated a quota in the governing council on the basis of this new social contract. Islamism became the primary (and nearly exclusive) mode of political expression. Politicians vying for political power pitted Iraq’s ethnic and religious groups against one another, carrying this precedent into the new government.

On the one hand, the realignment gave the majority Shia population a radical stake in the elected government. As long as the Shias remained a united political bloc, their dominance of Iraqi politics could not be meaningfully challenged. This was a watershed moment for the Shias, who despite accounting for more than 60 percent of Iraq’s population, were long relegated to political disenfranchisement. Shia marginalization in Iraq dates to the Ottoman era, through the British mandate and the monarchy and into Saddam’s Baathist regime. In fact, although Shias account forroughly half the Muslim population in the Middle East, the regional power dynamic favors the Sunnis. This imbalance continues to manifest itself even in Shia-majority countries such as Bahrain. Iraq’s transformation into a Shia state promised to radically upend the balance of power in the region — a prospect that Washington was not entirely comfortable with, given its fears about Iran.

In 2006 the U.S. chose Maliki to lead the new Iraqi government. He was shrewd, nonzealous and cast himself as a pragmatic strongman who could hold the country together when the U.S. eventually drew down its troops. However, in a system in which both the political process and alliances are based on religious identifications, Maliki struggled to shore up and expand coalitions, deal with rivals and build a network of supporters without taking on a distinctly sectarian stance.

On the other end of the spectrum, Bremer’s ham-fisted policies of de-Baathification of Iraq’s military and bureaucracy disproportionately affected the Sunnis, who were overrepresented in Saddam’s Baathist regime. It removed overwhelmingly Sunni social and military elites from positions of power and limited their stakes in the new Iraq. The move also left them with plenty of means to undermine the political process. The broader Sunni population found itself disempowered, with little political recourse to rectify its grievances. As a result, it grew increasingly susceptible to calls for armed resistance from disgruntled Sunni elites.

As a result of these dynamics, the insurgency against the state and its foreign patrons grew increasingly sectarian and radical. These trends culminated with the rise of the Islamic State of Iraq (ISI) — a group so radical that even Osama bin Laden chastised it for expending so much energy and resources attacking ethnic and religious minorities at the expense of Al-Qaeda’s primary mandate to drive out foreign powers and depose Middle East tyrants.

The ISI’s reign of terror led to the purge of Christians and Assyrians from Iraq. Shias and Sunnis grew segregated geographically, intermarriage rates dropped and political discourse became overtly sectarian. The 2007 U.S. surge temporarily halted its advance, capitalizing on a growing Sunni disaffection with its excesses — but ultimately the measure failed to resolve Iraq’s underlying sociopolitical dysfunction, resulting in the implosion that followed the U.S. withdrawal.

This was amplified in the wake of the 2011 Arab uprisings, with regional powers jockeying to expand their influence and undermine rivals amid its revolutions and counterrevolutions. This surge in sectarian competition across the Middle East had particularly fateful consequences for Iraq. Seeing the success of Al-Qaeda affiliate Jahbat al-Nusra in Syria, the ISI moved to expand its sphere of influence. It established an emirate in Raqqa, Syria, in defiance of Al-Qaeda leadership, and changed its name to the Islamic State in Iraq and the Levant (ISIL) to reflect its new regional ambitions. Then it made a triumphant return to Iraq after pillaging unprecedented levels of wealth and resources from Syria.

As Maliki and his Shia alliance struggled to form a new government, the ISIL began to capitalize on Sunni disenfranchisement to secure a wider territory, declaring a caliphate under the leadership of Abu Bakr al-Baghdadi. It has since rebranded itself as simply the Islamic State (IS), occupying a territory that transcends the borders of Iraq and Syria.

Ultimately, the challenge posed by the IS cannot be resolved by military means. While extremist groups have a tendency to alienate the communities that initially welcome them, the government will have to leverage this disaffection by offering an alternative vision that the populations can endorse rather than merely tolerate (even as it squeezes the IS financially and tactically). Anything short of this would simply be a prelude to the next revolt. Similarly, the new government will have to convince the Kurds that they would fare better in a unified Iraq than in an independent state. And it will have to accomplish both these tasks while maintaining the strong Shia allegiance and participation that renders the state solvent.

It is too soon to say whether the new government is up to that challenge.