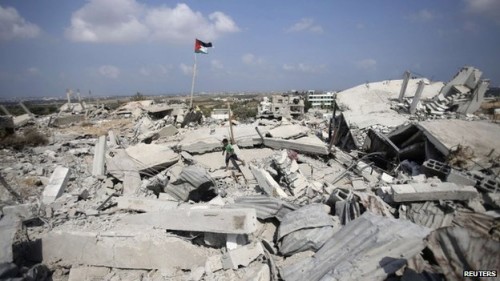 A deal is set to be signed in Cairo to extend the cease-fire between Israel and Hamas, according to reports in Israeli and Palestinian media.

Israel’s Channel 10, quoting Palestinian sources, said the agreement includes the easing of Gaza border restrictions and enlargement of the fishing zone off the Gaza coast.

Bigger issues — including demilitarization, the building of a seaport, the release of Palestinian prisoners and the return of the bodies of two Israeli soldiers — will be discussed at fresh talks in a month’s time, Channel 10 said.

Palestinian news agency Ma’an reported that Egyptian consultants were drawing up the documents and that Israel’s delegation had left Cairo to discuss the deal with Israel’s Cabinet.

No official announcement has been made, but Ma’an and Channel 10 said an Egyptian statement will be released at 11 p.m. local time (4 p.m. ET). A five-day cease-fire extension had been been due to end an hour later.

Communicating through Egyptian intermediaries, Israel and the Palestinians have been trying to resolve in days issues that have smoldered for decades.

Israeli Prime Minister Benjamin Netanyahu said earlier Monday that Israel was “prepared for any scenario,” with the Israel Defense Forces ready “for a very firm action if fire is resumed.”

Israeli forces remain positioned around Gaza. In recent weeks, they carried out aerial and ground assaults against Hamas to try to stop militant rocket fire and destroy a network of tunnels that extended under the border into Israel.

Operation Defensive Shield not over

Israel is calling for Gaza to be demilitarized, demanding that Hamas, which controls the territory, lay down its arms.

After meeting with Defense Minister Moshe Yaalon on Monday, Netanyahu reiterated that Israeli negotiators had been “instructed to insist firmly on Israel’s security needs.” The strength of the Israeli military and the Israeli people’s patience and perseverance would help bring them peace and security, he said.

Yaalon said Operation Defensive Shield was not over.

“We are getting ready for the results of the deliberations in Cairo, whether they bring quiet or someone tries to challenge us by escalation,” he said.

“The IDF is ready and willing to react with power to any development. Hamas will not drag us to a war of attrition, and if they try, they will get back twice as much.”

A senior Israeli official told CNN that the most central issue on the table was nonviolence.

The official claimed that the Palestinian delegation was not united and that Hamas political leader Khaled Meshaal was calling the shots in Cairo.

He pointed to what he said appeared were contradictions coming from the Palestinian side, asking, “how can Israel have full security while they’re still digging terror tunnels and making rockets?” The Palestinians, he said “can’t cherry pick what they want.”

Even during the cease-fire, Hamas has boasted that its rocket-making factories are still operating, replenishing its arsenal.

But in the view of Palestinian officials, disarmament is a nonstarter.

“That is not possible,” Palestinian official Nabil Shaath said. “Because Israel will not demilitarize either, will not even commit itself that it will never use military arms against Gaza.”

Speaking on condition of anonymity Monday, a Hamas leader said the Israelis had “submitted impossible demands on the Palestinians such as the issue Palestinian demilitarization, destroying the tunnels and the issue of preventing Palestinians from developing their missiles technology.”

The Israelis, he said, “want everything and want to give nothing.”

He said the Palestinians had responded with a counterproposal that shortened offering Israel “full security in exchange of full opening of border crossings” or lifting the siege completely.

Palestinians say Israel’s blockade is suffocating the economy of the small, impoverished strip of land and the lives of its inhabitants.

Among their demands are the rebuilding and reopening of Gaza’s airport and the establishment of a seaport.

But Israeli authorities — who retain control of Gaza’s airspace, Mediterranean waters and their shared border — say that releasing their grip on what goes into and out of the territory is too risky, as things stand.

“Building a seaport or an airport in Gaza without demilitarization is like getting a duty-free for rockets and missiles,” Israeli Intelligence Minister Yuval Steinitz said.

Meanwhile, the total number of Palestinians killed since the start of the offensive has reached 2,016, Ashraf el-Qedra, spokesman for the Ministry of Health in Gaza, said Monday.

The latest deaths include people who were found under rubble and those who died from injuries they received during the previous fighting.

The Israeli military says 64 of its soldiers have been killed, as well as three civilians in Israel.